A three day camp, with four lessons with the instructor Ulf Johansson at Runsten Equestrian Centre. As I don't like going alone to strange places me and Nemah was accompanied by Sabrina and Spex.

The information before the camp was sparse to say the least. We got an email where we had to state which dates we wanted to go, our level of experience, and food preferences. The week before the camp we got a mail letting us know which groups we were in, at what time the groups were to ride, and what to bring. For the horse - food and a water bucket. For ourselves - a towel and bedsheets. The rest was to be settled when we had all arrived. Things we didn't get was a map to the guest stable, any directions to where the cross country course was situated or where the house we were to live in was located.

Upon arrival we drove to the place where we saw other trailers parked. It turned out to be the guest parking for competitors in the ongoing dressage competition. As we had no idea where we were supposed to go we had to ask some people helping with the competition for directions. They also had no idea. Luckily one of the dressage judges walked by and saw my confused look. She couldn't help us with directions, but she introduced me to the owner of the place and he asked one of his stable girls to give us directions and finally we were on the right track again.

When we finally arrived in the guest stable it was in a state of busy chaos. Horses everywhere, tack everywhere and people walking around in this mess. We went through the stable twice before we found stalls for our horses. As we were a bit pressed on time we decided to try to find our living quarters after the first lesson. We dumped all our stuff in the busy stable, got ourselves and the horses dressed, and walked off towards the cross country course.

We started with some individual warmup, but soon Uffe started the lesson. We were told to stop the horses with the help of only our reins and legs. To make sure we worked with our core muscles, Uffe gave each one of us a tennis ball to put inside our shirts just below the bellybutton. This forced us to draw the stomach in and activate the core muscles. When we all got the hang of it we got to let the balls go and started the jumping. First a smaller log, which Nemah jumped without a doubt. 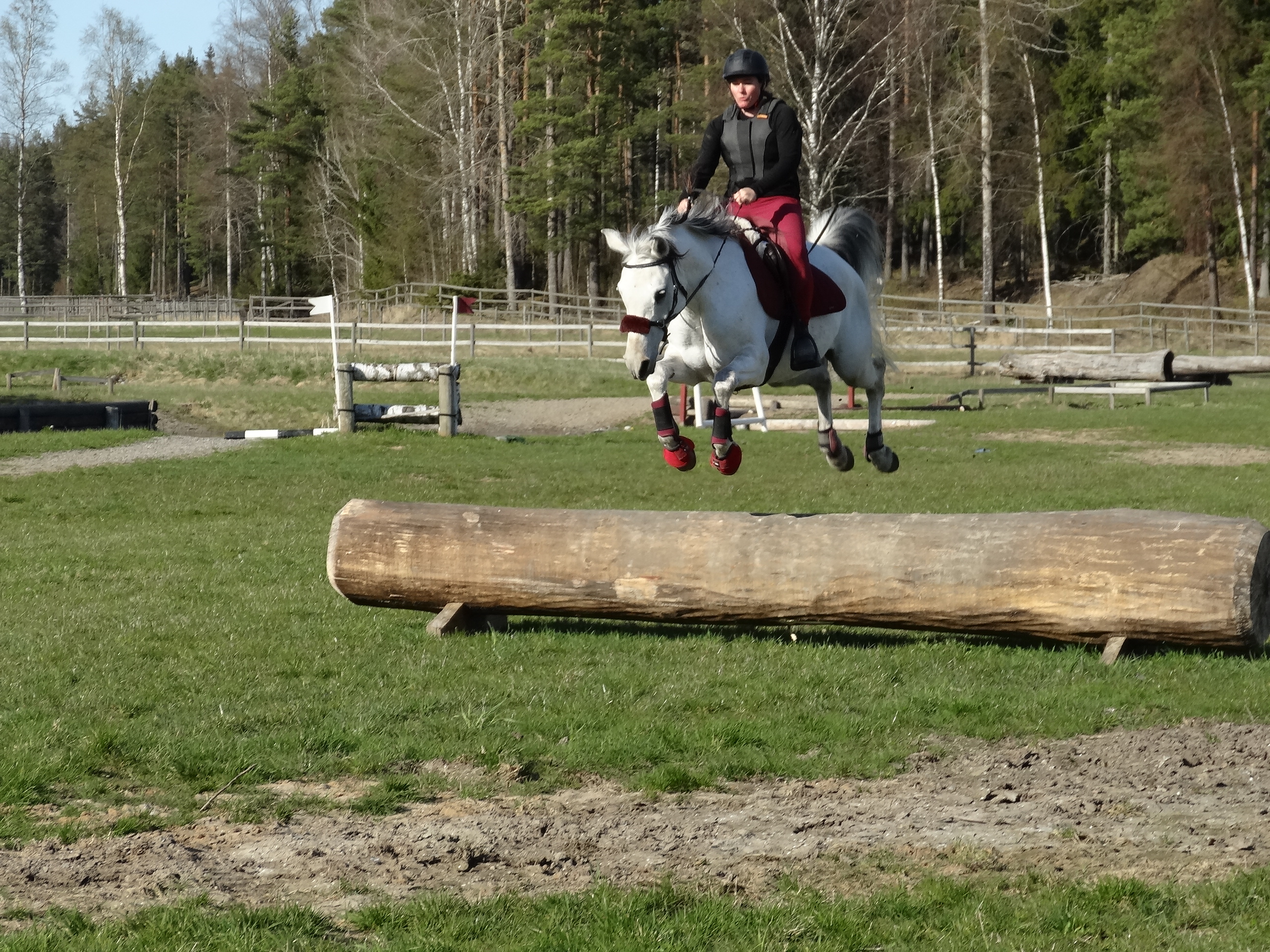 The next fence was in the shape and colour of a smaller house. I trusted Nemah to jump but to my surprise she stopped in the very last second and I fell of right onto the fence. Thanks to my safety vest I didn’t get hurt and I was soon on Nemah's back again. Sadly my trust in her was broken. We tried the fence again. She stopped again and Uffe gave me some instructions. I was to stand in front of the fence until Nemah felt calm and then turn away and walk straight away from the fence. About five metres out I turned towards the fence again, started to canter and jumped the fence. I had to use a lot of legs but Nemah did jump. 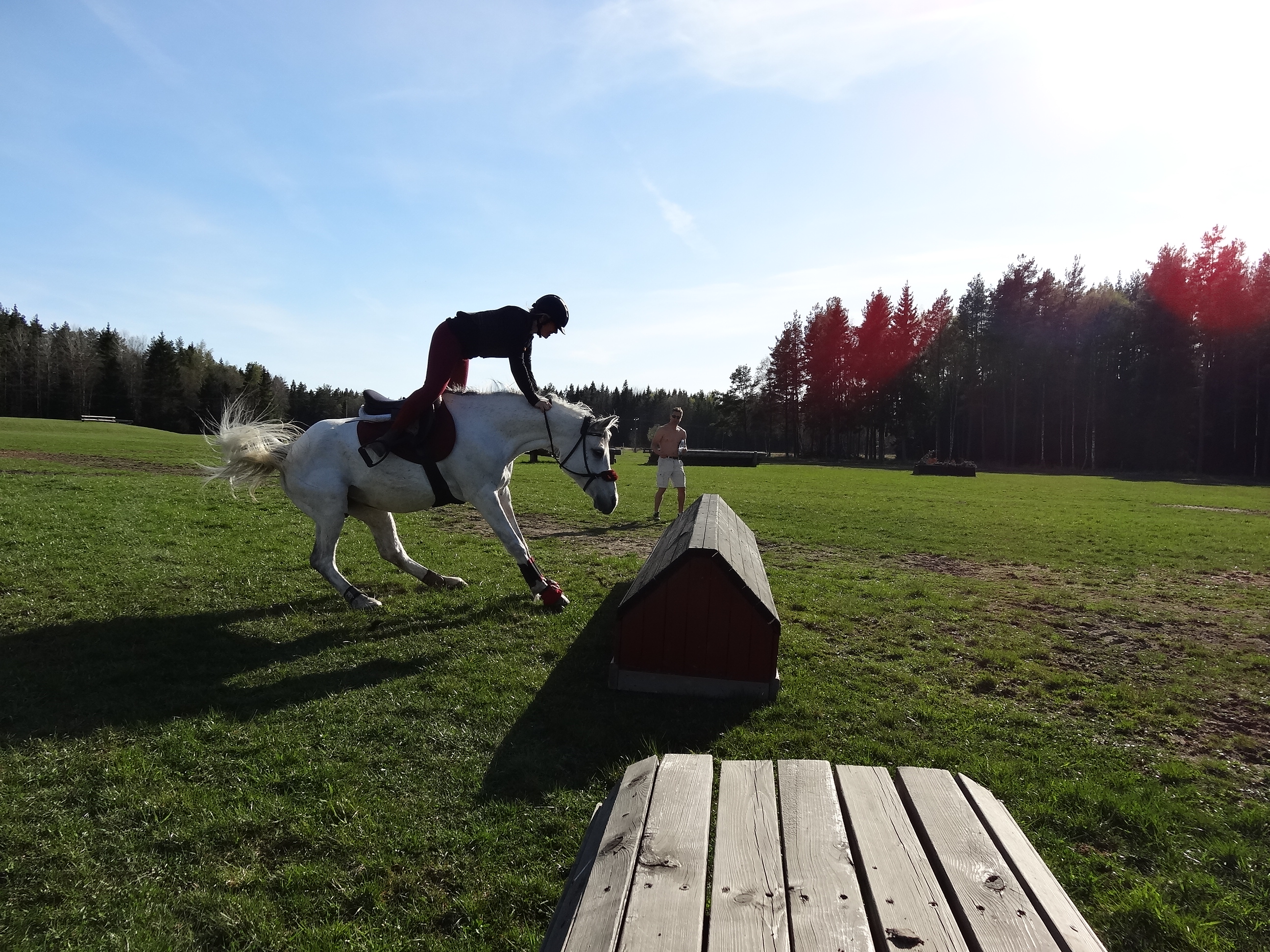 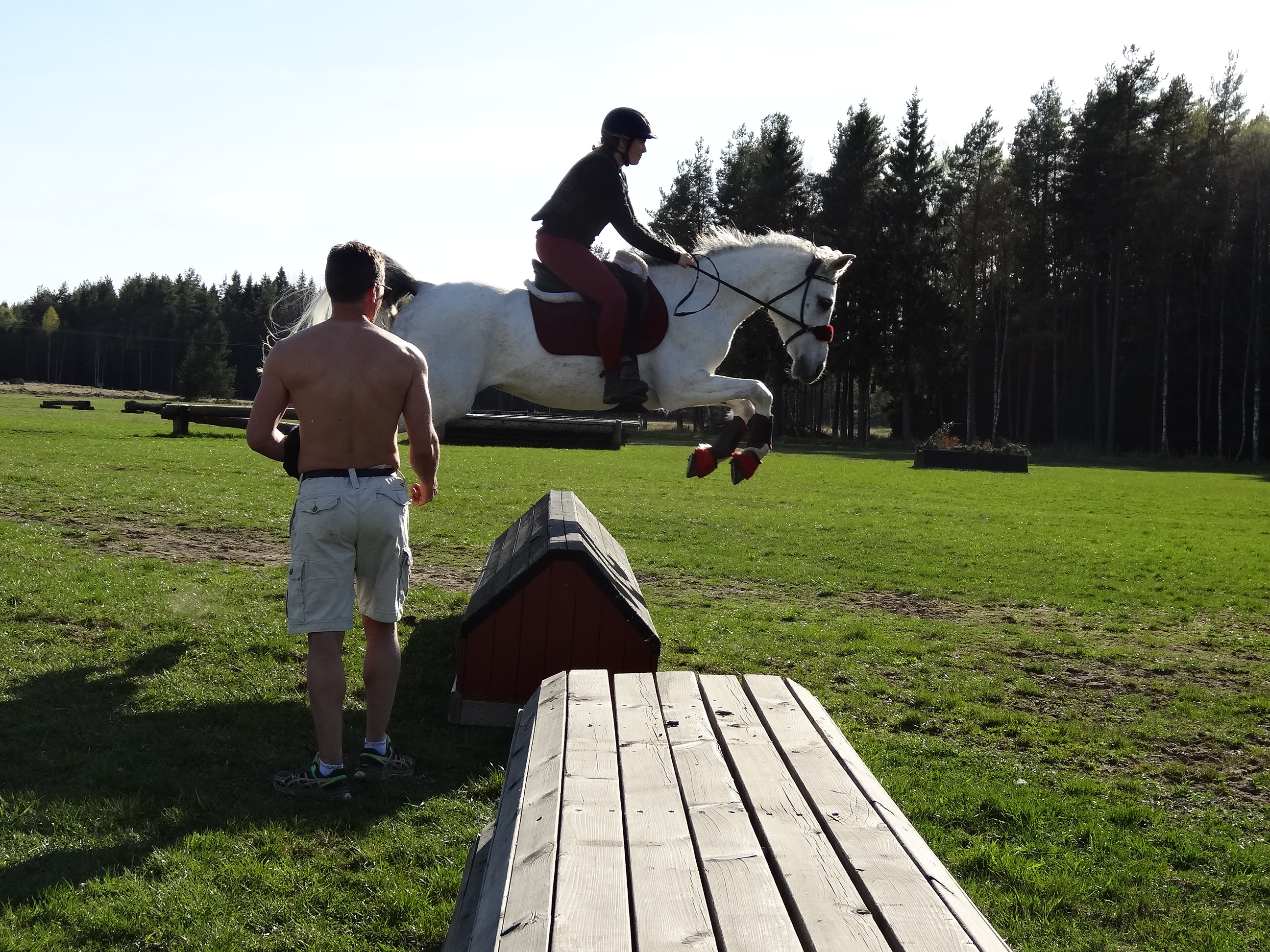 To make it more interesting we moved on to the coffin, a depression in the ground with a ditch at the bottom. The ditch in the middle was about one metre wide and maybe 60 cm deep. It was filled with water. Again we started in walk, moved on to trot and ended in canter, to build confidence and get used to the fence. Nemah hesitated a bit to jump over the big ditch, probably because I felt a bit insecure and really didn’t want to fall off into the water. We did, however, get past the ditch every time. 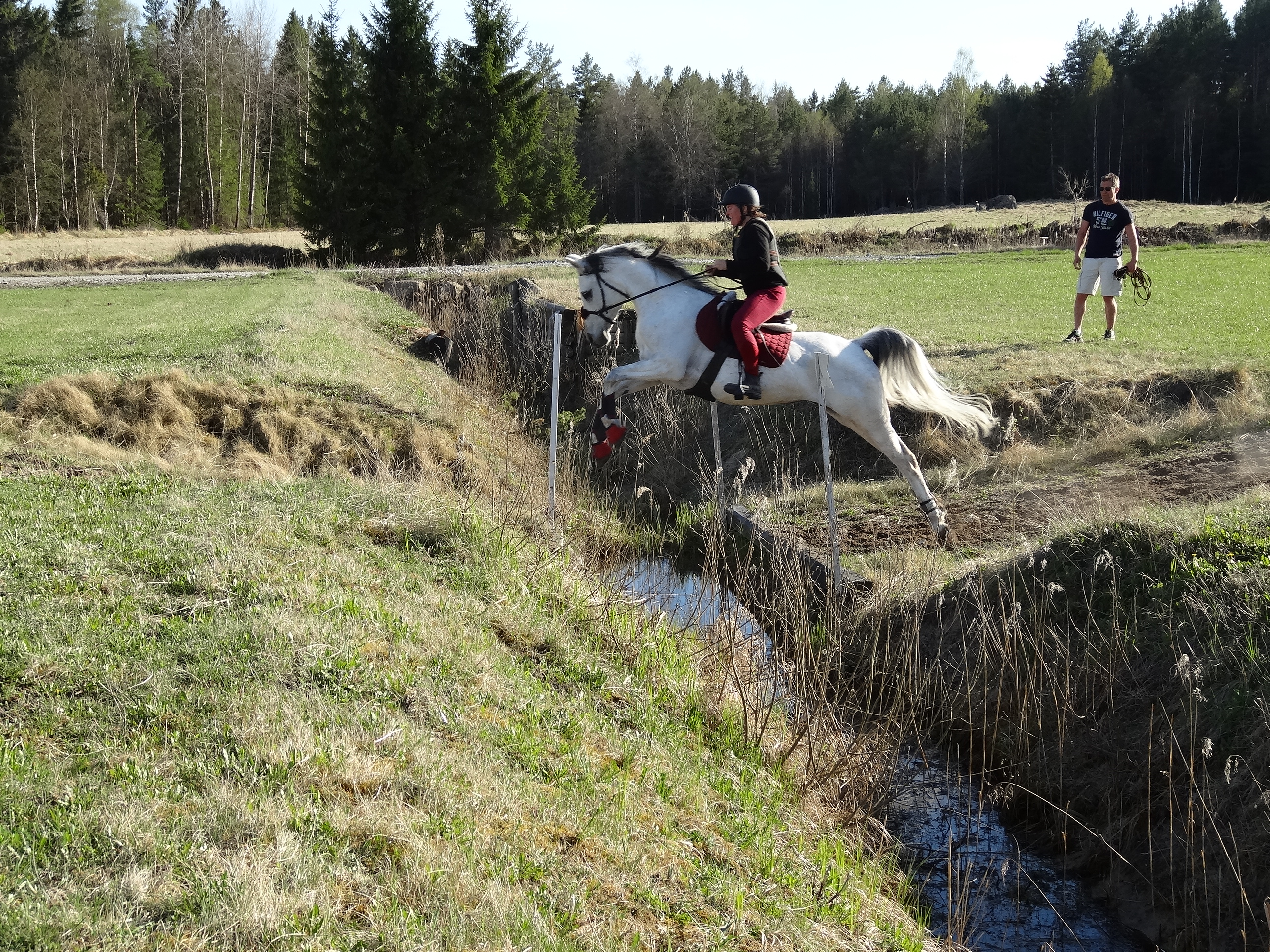 As the day's last exercise we walked through the water fence and just had some fun with it. Nemah likes to play in the water so it was a great ending of the lesson for us. 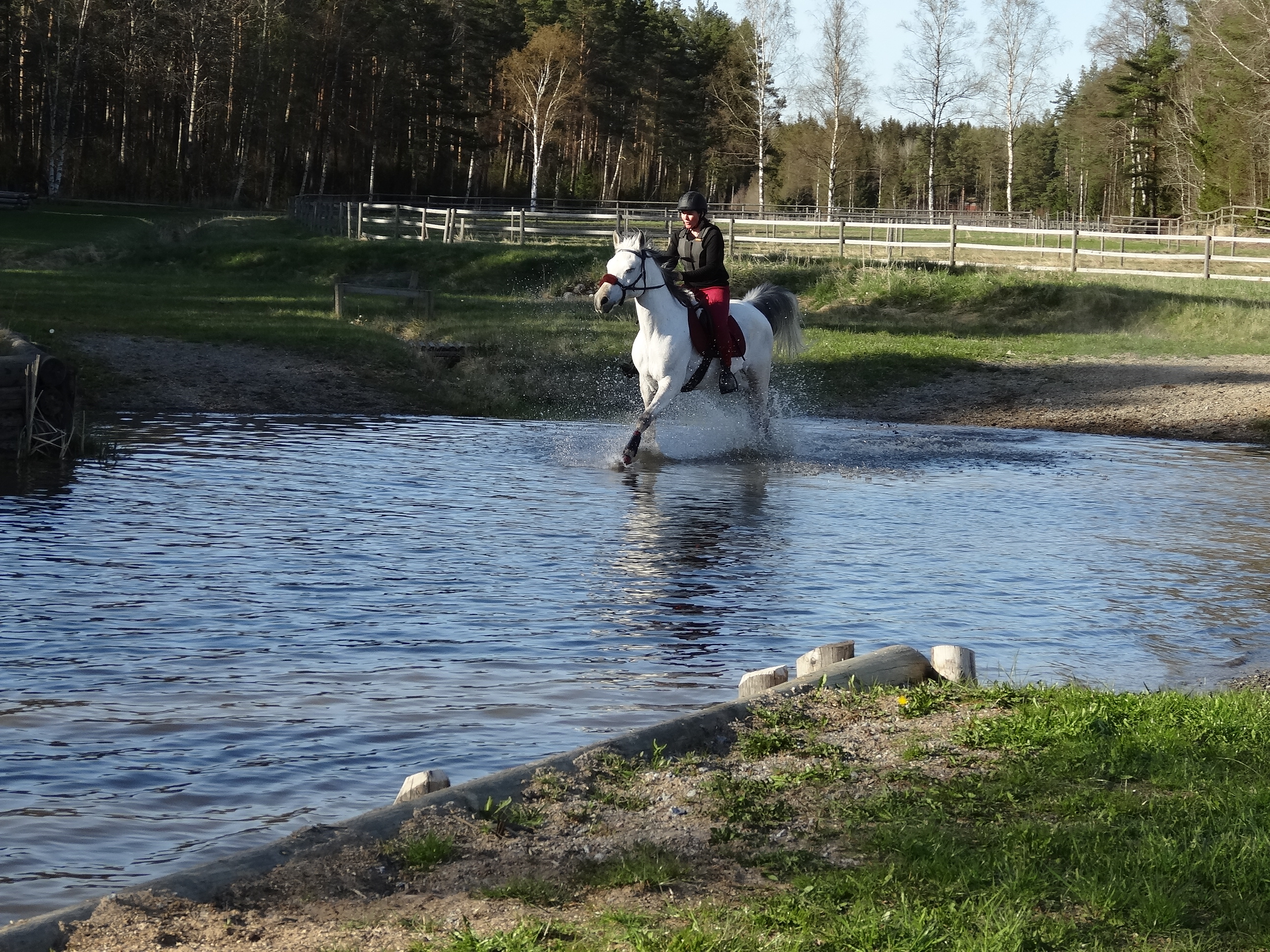 After taking care of the horses we started looking for the place where we were to sleep. After some confusion we found the two houses. In the first all rooms were taken. But in the second, called the loft, we found a room with two beds that we could sleep in. As we didn’t have any lockers to put our saddles in we brought the saddles to our room. After a quick shower we went to the cafeteria, in hope of finding food. Rumours had it dinner would be served until 20.00. Having allergies I asked about special food and got a rather annoyed answer from the woman in the cafeteria. She had been unaware of my allergies until this morning and hadn’t had the time to plan something decent for me to eat. But there was food I could eat, and I was too hungry to need anything fancy.

As I have a problem sleeping the first night in a new place I got up early and fed the horses. After breakfast we had our second lesson.

We started with a continuation of the day before - ditches. To get us all used to the fence we followed the same procedure as the day before, walk, trot and lastly canter. When we all felt comfortable and safe we moved on to the coffin again, this time with logs before and after. We started with the logs placed so far away from the ditch that it really was three separate fences. As our confidence grew, Uffe moved the logs closer and closer to the ditch. Nemah still found the ditch a bit strange, but jumped it anyway when I told her. 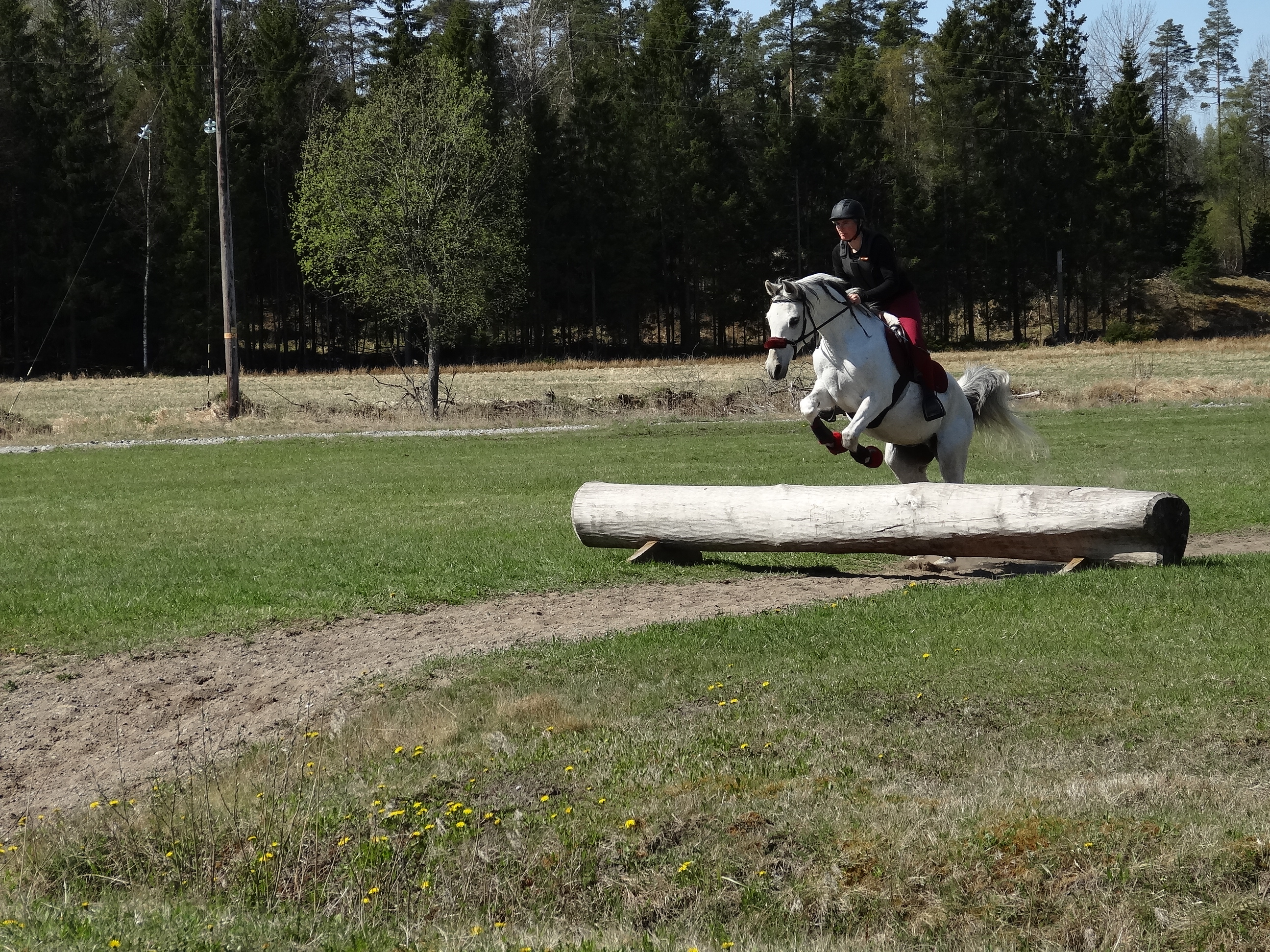 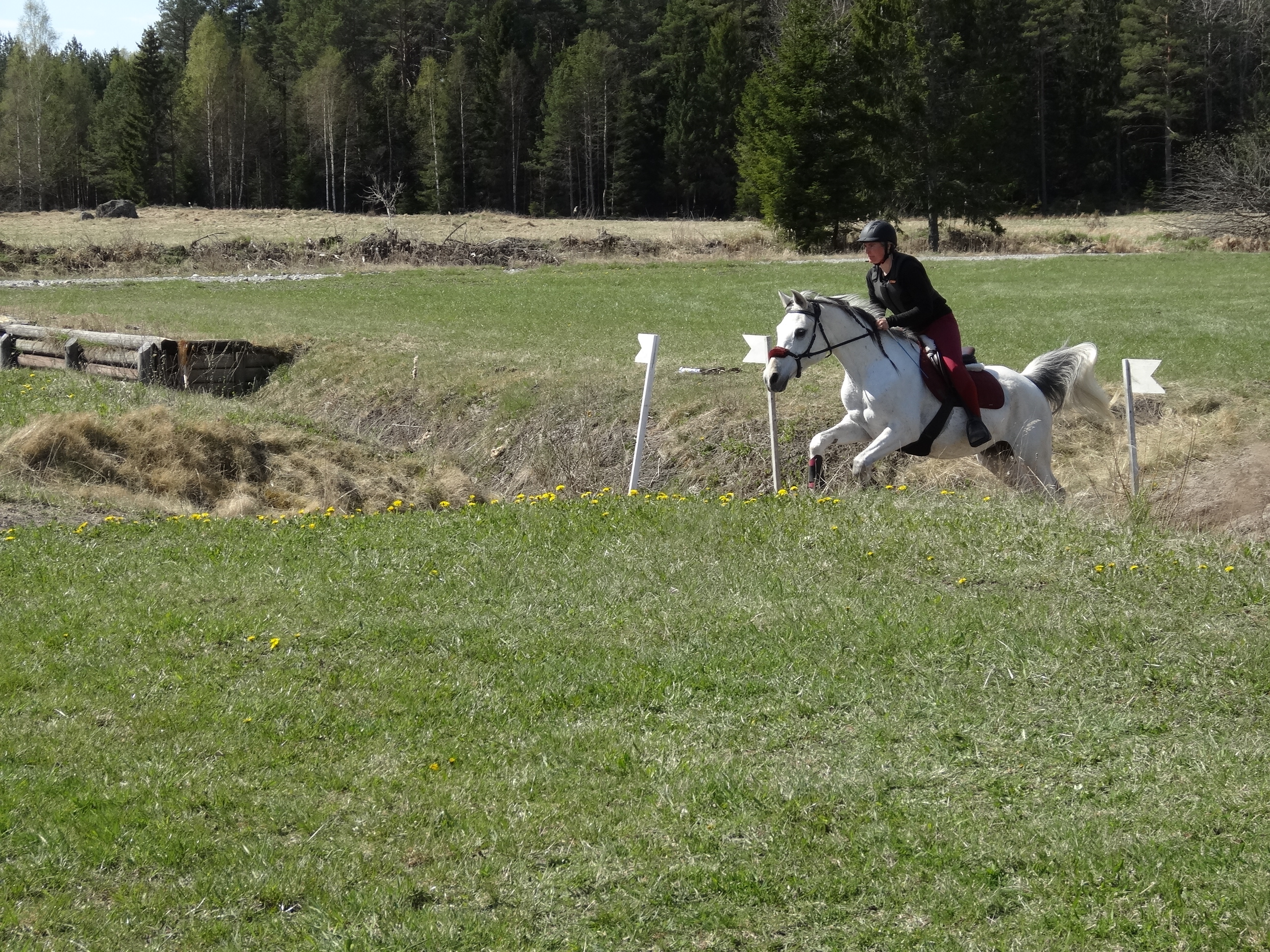 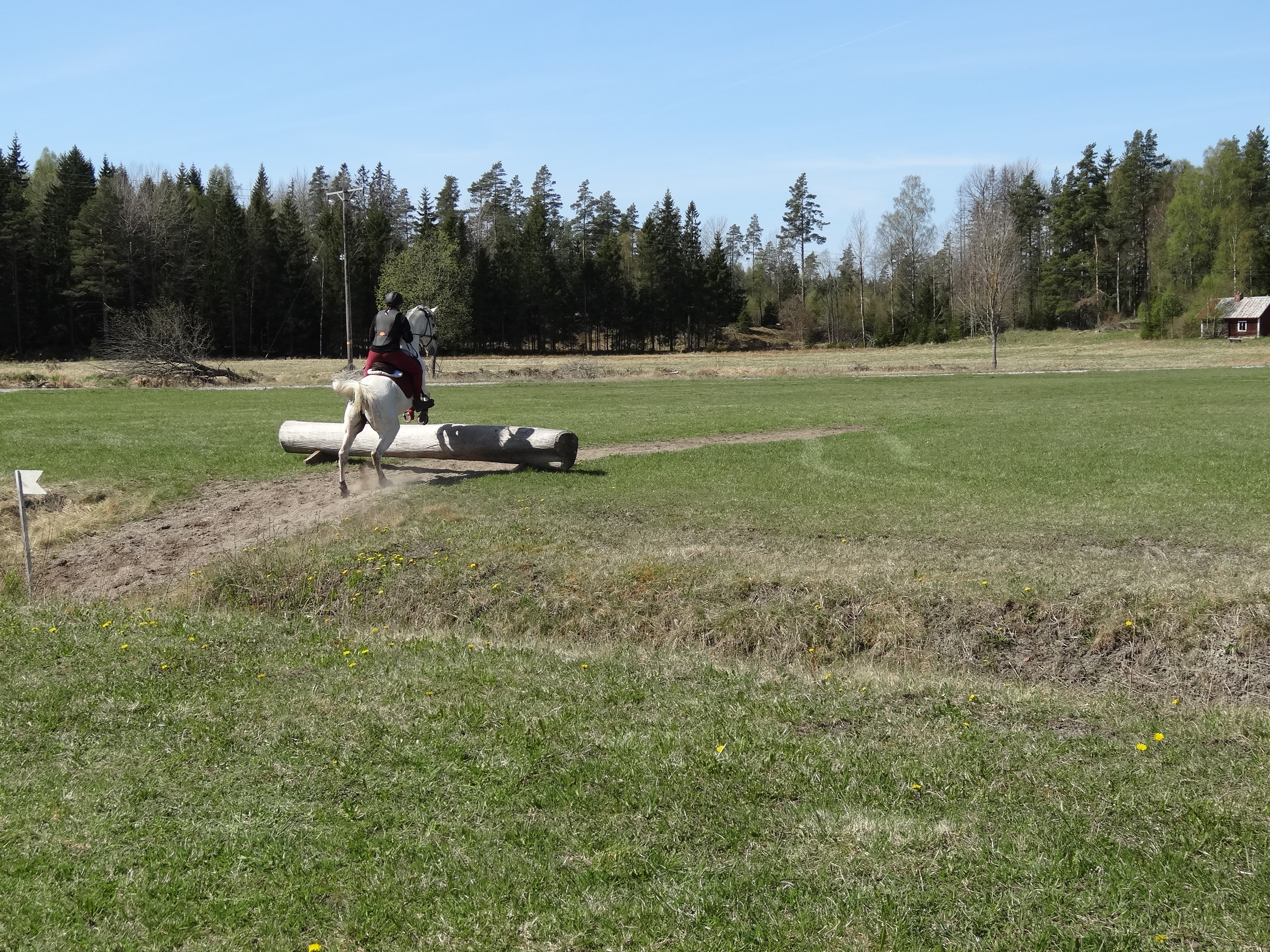 After jumping when the logs were only about two strides away from the ditch we moved on to a narrow fence consisting of smaller logs placed on each other. The first time Nemah refused to jump, probably because I still felt a bit insecure. We got to do the same thing as the day before, stop in front of the fence and then turn and try it again - this time she jumped. 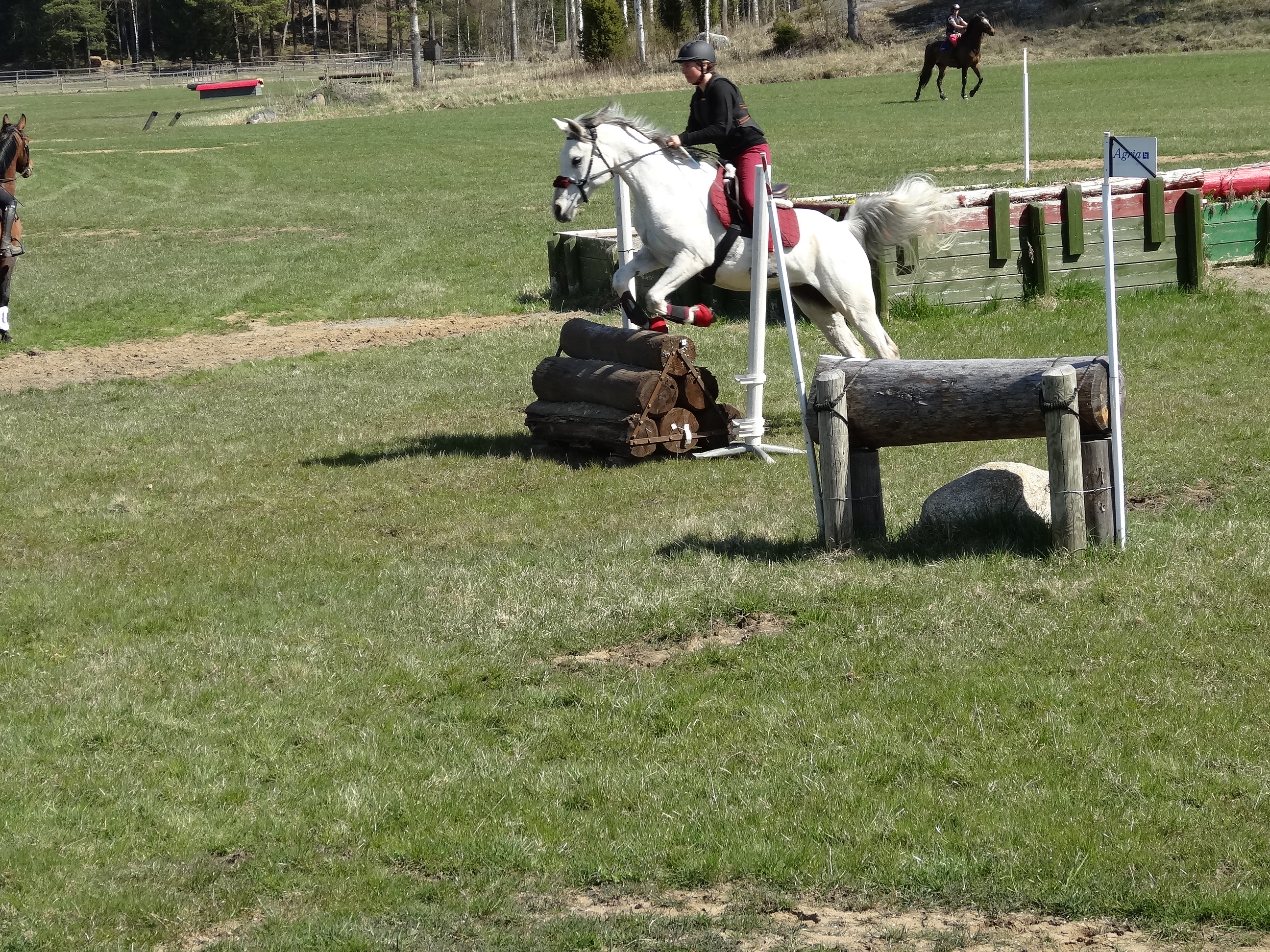 We moved on to the bank. A bank is a fence you jump either up or down, or in our case, first up and then down. Jumping a bank really challenges your instincts as you have to do the opposite of what you really want to do. When you jump up on the bank you need to keep the contact with the horse's mouth through the reins even though instinct tells you to let go. If you let go of the reins the horse will fall into the fence. Once on the bank all you want to do is hold on really hard as the horse jumps down from it, but what you should do is to give the horse a bit longer reins and just relax your hands.

Nemah thought this fence was a bit strange, but she jumped it really well. Since Nemah was starting to get tired we stopped here, when the rest of the group got to jump a sunken road and a staircase.

We found our lunch in the cafeteria, again, and then got an afternoon off until the next lesson. I fell asleep in the sofa and Nemah got some well deserved time off in a smaller sand paddock.

Water, the fence of my dreams. For as long as I can remember I’ve wanted to ride in water. So far I haven't had the chance to do so due to lack of rideable waters. Now I was finally going to test it.

We started off in the same educational way as the previous lessons.

The next difficulty was jumping up from the water, much like when jumping up on the bank. Nemah jumped really well and we moved on to jumping into the water from the bank. Again in an educational manner.

As a final exercise we got to ride a course through the water and over the fences around it. We jumped a gigantic wooden box that was around 80 cm high. That’s one of the highest fences we have ever jumped with Nemah and it was a solid fence! Nemah felt really great and I got that lovely feeling of being one with Nemah - she going where I wanted just because I looked where we where going.

After this lesson I could have died happy, but there was one lesson left. The next day we decided to watch the others ride, as our lesson was to take place at about half past 12. Once out on the course we where informed that since it was just a course to ride we could show up at any time. So we went and got our horses ready for the last ride.

Yet again it was really well thought through as we all got individual courses to ride depending on experience and how the weekend had progressed. It was really fun to ride a whole course, Nemah felt great and jumped every fence with pointed ears. On a log on top on a small hill I was too tired to make Nemah jump and she jumped on the side of the log. On the stairs she also broke out to the left as I simply was too tired to help her out. Between the fences she kept a great canter and I could feel how much she was enjoying herself. To teach Nemah not to avoid jumping we got to jump the log on the hill and then the weekend was over.

Runsten Equestrian is a great venue for a cross country camp. The course was lovely, with different fences for all levels of experience. They do, however, need to work on their organisational skills, especially on how they take care of people who has never been there before. A map of the place, a proper welcome, and proper introduction would make the stay much better for a beginner.

As for the lessons and riding I can only say: cross country jumping is really, really fun! If you ever get a chance to try, just do it! The horses love it and it builds confidence between horse and rider. It also gives the horse a better self confidence. This particular weekend was made great by the trainer, Uffe. The way he began with the easiest of fences and then moved on and raised the level just enough to let us all feel safe, but still challenged. Uffe was a great instructor and his instructions made sense at all times. He seemed to really care about the horses and how they felt. When a horse was too tired he wasn’t afraid to say so, and he adapted the lessons to match both horses and riders.