At last another lesson in academic riding. This time Suz had planned a really difficult exercise for us: The diamond.

The diamond is ridden between the middle of the sides of the arena. To make it a bit more interesting I was told to test different ways to put my weight on the horse. 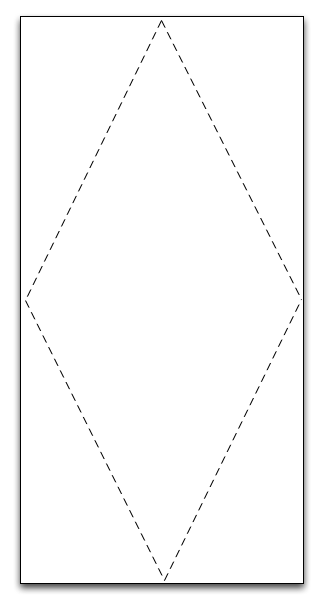 We started off with shoulder in. First I got to place my weight on the inside, which resulted in Nemahs strides being shortened. I then got to put my weight too far on the outside. Nemah immediately started lengthening her stride but I also got the feeling that she was falling away from me. As a last thing we tried to find where I should place my weight, in the middle. When I did Nemah moved really well and I felt in control even though my reins were long. We tried this on both reins and on occasion I actually managed to place my weight where it was supposed to be.

The shoulder in on a diagonal is something my head don't really want to understand. I can't seem to figure out how it should look. On a straight line you can think that the shoulder in is like the start of a volte. The horse has it's front hooves a bit inside of the back hooves and it's looking inwards. On a diagonal it’s simply not that easy but I did, however, manage to get my brain wrapped around it and the result was really good.

On to the same thing in half pass. This was much easier, mainly because the half pass comes more naturally to me. I don’t know why I find it easier, most people think half pass is harder than shoulder in, but not me. When doing a half pass on a straight track you can think that the half pass ends the volte. The horse is looking straight ahead and has it’s hind quarters a bit inside of the front hooves. We tried with the weight on the inside and on the outside and lastly with the weight where it should be. I had some problems going to the left and Suz had to put my hips and my weight where they were supposed to be.

As a last thing we combined the two exercises into one. On two of the diamond’s sides we rode shoulder in and on the other two half pass. This was really hard, managing the turns, keeping on track and shifting between movements. And to add to it, we did it in trot. The first couple of laps was mostly chaotic, but after that we started to put all the pieces together and in the end Nemah felt really great, shifting her weight to her hind legs and using her body in a better way. 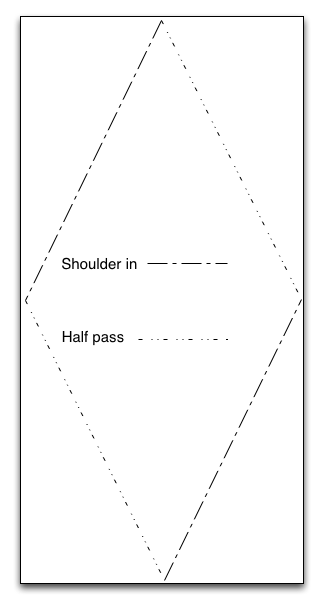 This was a great lesson, we got a lot of praise and Suz liked the change she saw in us. She said she will now plan even harder things for us to do, as she now feels we are ready for it. Both Nemah and I felt relaxed and happy after the lesson.