Two days ago when I was just about to get up of the sofa and go make dinner I got a call from the stable owners. Getting a call from them can mean two things; either my co-rider has forgotten to take care of Nemah or Nemah is ill. Yesterday, sadly, Nemah was not feeling well at all. She just wanted to lie down and did not eat. When Nemah doesn’t eat you know something is really wrong. Lennart made us some sandwiches and we got picked up by a friend (thank you Sabbe!). 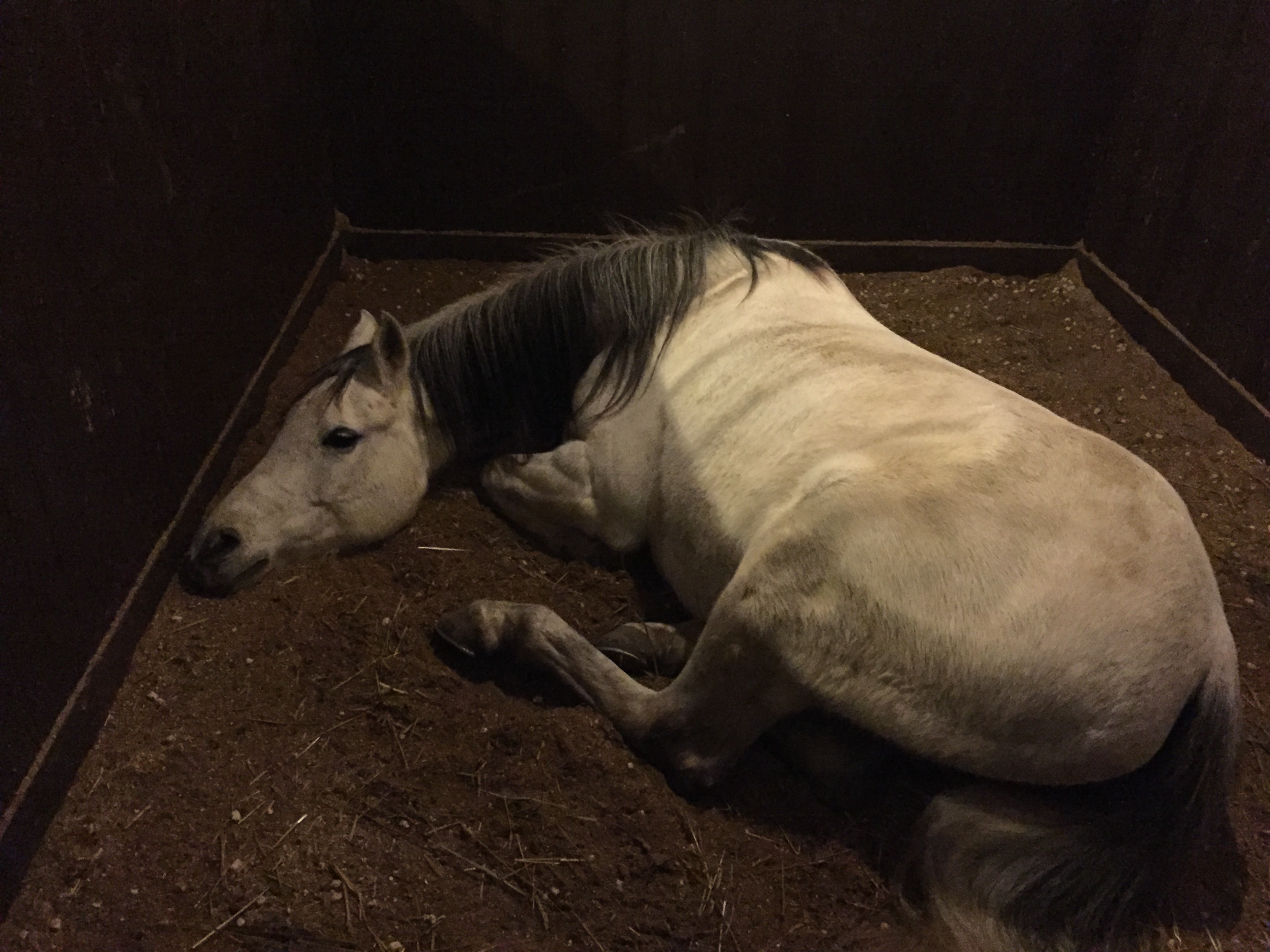 When we arrived in the stable Nemah was laying down. She had eaten a small amount of food, but most of it was still there. She got up when I called her name. I did my usual check; stomach sounds, legs and hooves, general feel, and taking her temperature. She had a slightly elevated temperature and was more grumpy than usual, but no other visible symptoms. I decided to try to go for a walk, which is the first step you take if you think your horse has a stomach ache.

We walked for maybe twenty minutes, she pooped once (a good sign!) and then we put her in the box again. She immediately laid down. As she was calm I let her be and called the veterinarian. Lucky us to have veterinarians that work all hours of the day (and night). She arrived 30 minutes later. In the meantime we took yet another walk as that works as a natural painkiller.

The veterinarian arrived at 21:30, checked Nemah’s temperature again, it had risen to 38.8° Celcius. To Nemah 38.2° is a fever. The vet listened to Nemah’s heart and we brought Nemah into the stable for a rectal examination. Nemah got some nice drugs, both painkillers and a mild sedative.

The vet could feel a constipation, but she also felt something that could be a bit of the colon wrapping itself above the spleen. That’s not the correct placement for the colon. She gave us two options; wait at home and hope it would sort itself out, or drive Nemah to the closest night open animal hospital and see if they could get a clearer view on things. As I believe it’s better to be safe than sorry I decided to try to find someone who could drive us to the hospital. I phoned one of my friends who work nights, as I know she’s been helping people with things like this before and to my very best of luck, she had four hours until she had to be at work. Thanks Annika, you are a real life saver!

About an hour later we arrived at the hospital. We were shown a box where we could put Nemah as we waited for the veterinarian. As the only horses coming in at night are really acute cases and there was another horse even worse than Nemah, we had to wait for a while. At around 00:45 they had time for us and Nemah got another rectal examination and an ultrasound to get a more exact diagnosis.

Nemah wasn’t the easiest horse to get a decent ultrasound image out of but the vet seemed sure that the problem was a left dorsal displacement with nephro-splenic entrapment.

As there was nothing more I could do I put Nemah in a box and left her there for them to take care of her. They were going to keep a close eye on her over night, get her fluids up with some intravenous therapy and give her medication that would shrink her spleen to a fourth of its normal size and thus hopefully give the colon space to drop down from its wrongful placement. And home we went with our hopes a bit higher than when we arrived.

Yesterday morning they called me back (as they do once every day if you horse is in the hospital) to let me know that Nemah was not feeling as good as they had hoped. She had started experiencing pain again and the first medical treatment had not worked due to the high tension in the area. They were also afraid there might be an inflammation in the colon that could have started the whole thing. They let me know that if she got worse I only have two options, open surgery or putting Nemah down. A surgery is a very costly thing with a long rehabilitation period and a lot of extra work. It is now up to me to ponder these options and if they call be as prepared as I can be.

It is not always fun with horses.