This autumn Nemah has been working more than ever before. It's been dressage trainings, hunts, show jumping competions, and working equitation, all mixed with some nice long rides in the woods. Sometimes I’ve had the feeling that something was a bit off. No-one has seen anything, Nemah's been working better than ever before, but still there has been just a hint of something I can't really explain. I have learnt to listen to my feelings when it comes to these things so I booked a meeting with the veterinarian. As the farrier is at the veterinary station I figured I could do both at the same time.

Doing this means an early morning, you want to do the veterinary things before the farrier when you have a horse who might react to the new shoes.

I woke up well before dawn and went to the bus in darkness. Arriving at the stable at 7 o’clock, the horses were already out in the pastures. I quickly got Nemah ready for the trip and our ride arrived right on time. Due to the ordinary morning traffic jam we arrived at the vet. station just in time.

After the usual greetings and a quick medical history the examination started. We did the usual checks; lunging, walking, running and finally the flexion test, where the vet. bends each joint in the legs trying to provoke any lameness. The flexion test usually shows something if there is anything to see. Nemah had no problems at all, to my big surprise. Her hocks, with their bone spavin, didn’t show any reaction at all. A clean bill of health for Nemah! The only problem was a small disturbance in the movement in her front legs. Looking at it you get a feeling of her moving forward whilst touching the brakes. Since the joints were ok it had to come from the hooves. To be sure we decided to anaesthetise the left hoof, to see if it would unmask any lameness in the right one. One expected outcome would be Nemah growing increasingly more lame on the right hoof as the pain in the left one subsided. This did not happen. She did get slightly better in the left hoof, moving more forward with that leg, but the right one was just as it was before. To get more input we needed to see if the farrier could find anything in the hooves.

After taking the shoes of and cleaning the hooves the farrier couldn't find anything out of the ordinary. He changed the shoes and sent us on our way. We went home with a prescription for the pain and the advice to let Nemah get some weeks off from hard work. Luckily Nemah can still be let out in the pasture and we can still ride her, but only in walk. No other treatments this time. I will check up on her again when we return in seven weeks to fix the hooves again. Hopefully they will be better by then, and until then I simply have to try and not think about what would happen if the hooves are still acting up.

Get the latest posts delivered right to your inbox

Back in May I announced that I would go on a journeyman tour. More than half a year later, that journey is coming to an end. Or rather, to a new beginning. During my journeyman travels, I was sorely tempted more than once to 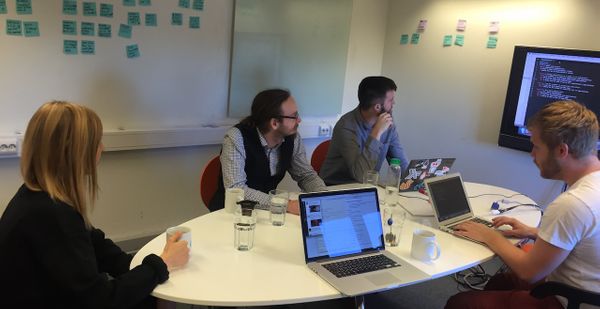 It was Wednesday morning and I was in somewhat of a sour mood. The previous day's mob programming session hadn't progressed in any way I thought it would. To a

Stay up to date! Get all the latest & greatest posts delivered straight to your inbox