The last days I have been accompanied to the stable by people with different experience around horses. This made me think of how different you must put things to someone that knows what and how to do something compared to when they don’t.

To me, the things I have to do in a stable come naturally. I’ve done all my chores so many times, I know them by heart and I can do them whilst thinking of other things. I have a system and a routine for everything I do, from mucking out to preparing the hay and brushing my horse. I know when, where and how to wash the tack and I know how many days the water in the pasture will last before I need to clean the buckets and refill them. To me all of these things has become second nature. This is not the case for everyone and I just got a great reminder of this.

First it was Lennart accompanying me for a ride in the woods. Since I bought Nemah 7 years ago, Lennart hasn’t been much in the stable, mostly I think because the lack of suitable horse for him to ride, but also due to his allergy. He tried riding Nemah a couple of times, but she is far too sensitive for him and this I guess this made him lose his interest. This is actually one important thing in learning and doing new things. If the task is too hard there is a chance you might give up due to the feeling of being totally overwhelmed, but of course the opposite is also true. With a task too easy it just gets boring.

Anyway, Lennart has had a good teacher from the beginning and I know I can trust him to fix most things around horses on his own. It takes a bit longer for him and he needs to actively think about the things he does. Sometimes he needs to ask a question about something that to me seems totally obvious. Where I have a routine he needs to think. Too much information at the same time makes him forget or not understand the instructions. A perfect learning experience for me, who definitely needs to get better at giving proper instructions at a decent level. This day I tried to make the work in the stable faster by telling Lennart four or five instructions at a time, with the result that he lost about half of them and had to come ask me. End result was, of course, that it went more slowly than if I had just let him get one instruction at a time.

Despite my somewhat confusing instructions we did have a lovely ride and everything we had to do got done. 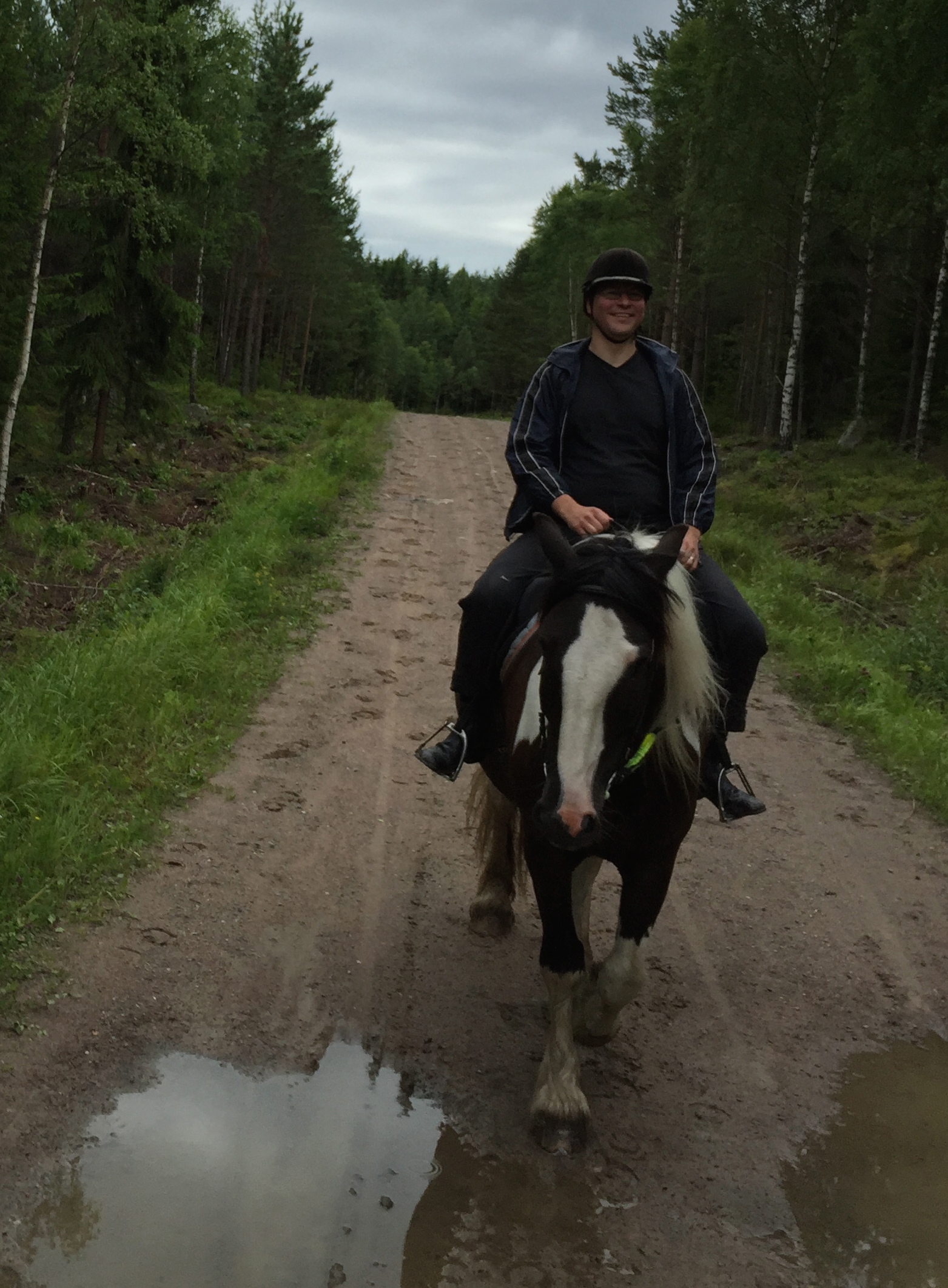 Second it was one of my co-workers', Henrik's, turn to meet Nemah. I don’t really know how much experience he’s had with horses but definitely less than Lennart. This meant letting my instructions get even more clear and explain things more thoroughly. Being around horses is not only fun and joy, it can also be dangerous as they are easily spooked - when scared they might lash out or just run away, even if a person is standing in their way.

Since Henrik wasn’t that used to horses we started with just saying hello and then brushing Nemah. To me it is obvious how to do this, but that is not the case if you are not used to horses. I had to instruct Henrik on how to hold the brush, in what direction to brush and what pressure to use. Also there are some spots one should be a bit more careful, like the hind legs. Like almost all people being new to something he was very careful not to disturb or break anything (like the 450 kg horse in front of him). I also instructed him how to use the horse brush and currycomb, but managed to leave out the part about scraping of the dust from the brush onto the comb so instead he tried the comb on Nemah. A lack of instruction due to me thinking it was all to obvious how to use the brush. After the brushing he got to clean out the hooves (very carefully) and then he took Nemah for a walk. I am proud to say that Nemah behaved almost exemplary, stopping when he told her and starting again when he did. 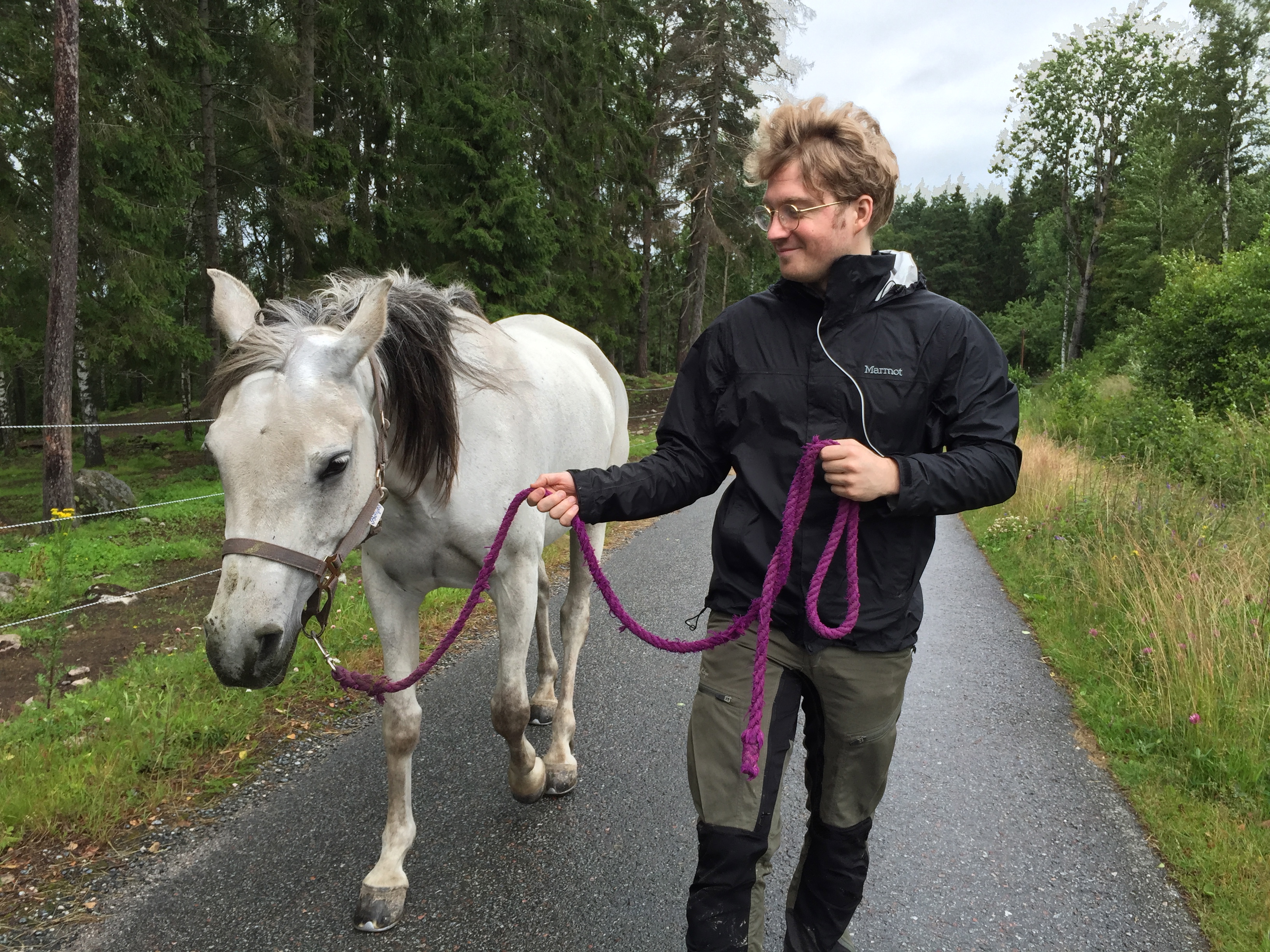 So, what did these experiences teach me?

For one it is that it feels really good to be the one that knows the most. This however comes with a price. If I want people to understand and learn I must adapt my instructions to their level of experience. If I am unclear, mistakes will be made and someone might get hurt. I realised I need to get much better at giving instructions to people of all levels of knowledge. Discussing things with people on my level is not that hard, getting people below it to understand is a completely different thing.

Another thing that springs to mind is that I believe it is a really good thing to try things you never tried before. Getting the feeling of being the newbie, the one that doesn’t know a thing, gives you a perspective on things in the places where you are the knowledgeable one. How did it feel to know nothing? How did it feel to have to rely on someone else to be able to do things that to them are second nature? How would I have wanted to feel? How should I treat them that do not know the things I know to make them feel safe and dare to try?

Being a newbie also means helping someone else getting better at what they already know. Having to explain in an understandable way makes you think more thoroughly about the things you do or know. Why do I do this? How do I do this? Are there other ways to do this that are better? Why do I choose this one?

It is true as they say, until you can explain a thing so that anyone can understand it, you don’t really know it.