I know this, I have always known this, but the last week there were a lot of people noticing her as the star she really is.

It started at the farrier’s, where he told me that he liked the fact that Nemah always gives back. What does this mean? Well, some horses have a very strong opinion on how you should treat them (mares in specific) and a lot of these horses will fight you over this. Nemah, being a true arabian princess, has really strong opinions when it comes to her hooves. There has been a lot of fighting over these opinions throughout the years when the earlier farriers haven’t listened to her. The good thing with Nemah is that if you do it the way she prefers and prove to her that you are worthy, she lets you do whatever it is you want to do. If you gain her trust she will probably go through fire for you, but mistreat her and you have made an enemy for a very long time. Our farrier has proven himself to be a real gold mine, always listening to Nemah and what she wants and needs and thus getting a relaxed and pleasant horse in return. 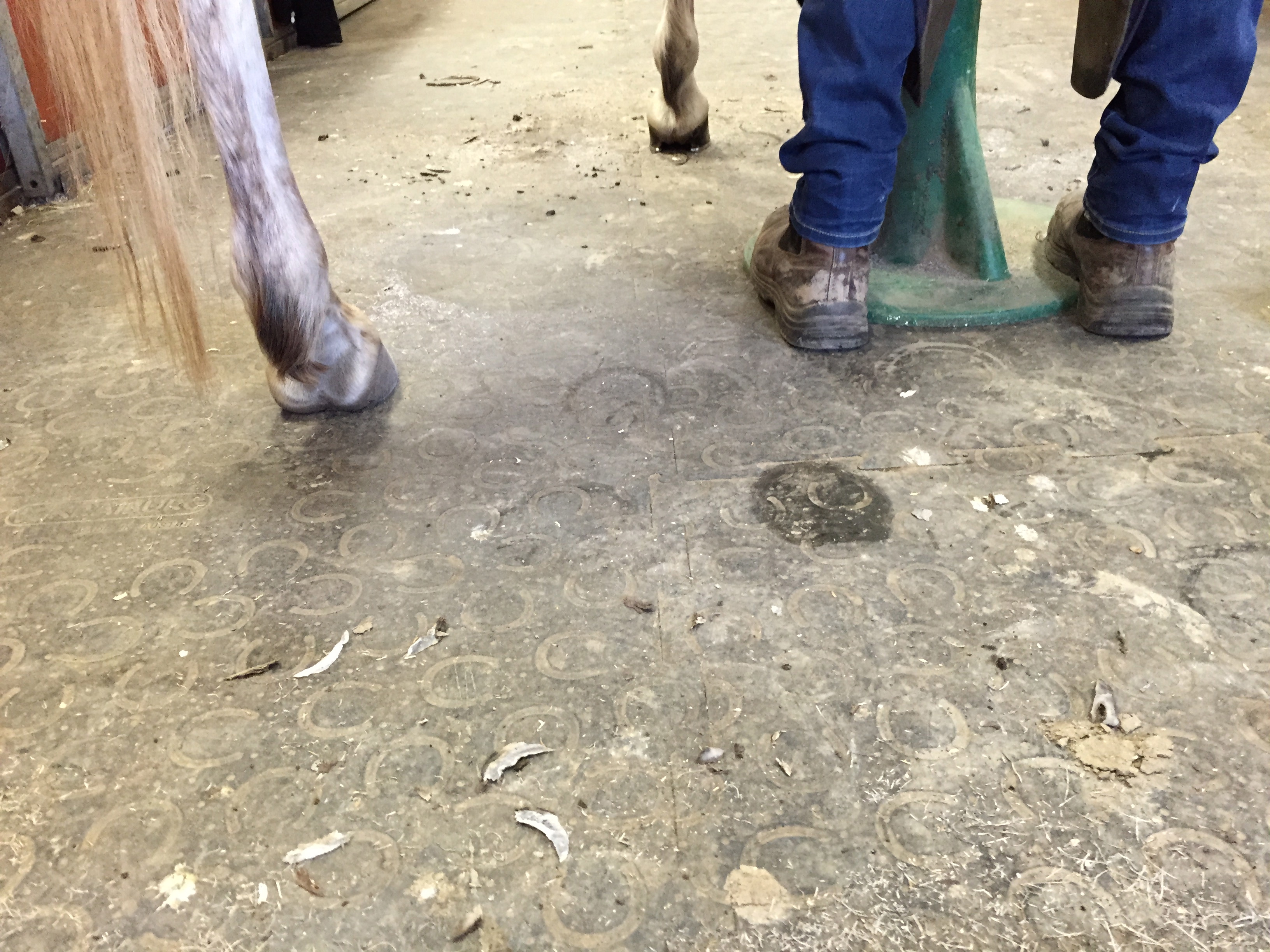 The next fun thing happened a few days later, on the neighbouring stable’s annual competition in dressage and show jumping. I entered us against all better judgement, we were, and still are, not at all ready for this. But I compete because it’s fun and we both need the experience. Said and done, on Saturday it was the dressage, we entered the easiest class (LC:2 2015) and I went in with an attitude of over 50% and I am happy. On the morning when I went to the stable the bus was full and drove past me so I got to the stable 45 minutes late. Luckily Emelie, the stable owners daughter, helped me get Nemah in from the paddock. Nemah usually senses my stress and refuses to let me catch her. Even though my stress level was beyond the roof Nemah was a brilliant star, just standing there when we brushed, braided the mane and got the tack on in a hurry. And on towards the competition!

Nemah did as she usually does, exactly what I tell her. She kept her head cool even though there were a lot of horses and a bit of chaos in the air. In the arena I was a bit unsure of the pattern to ride, but Nemah did her best to understand her confused rider. We ended up at 54.7%, which is above my goal of 50%. The thing making me most happy is Nemah’s lovely attitude towards the whole thing. Alone in an indoor arena, with a very clean, well dressed and nervous rider, and she still does what I tell her to, to the best of her ability. Apparently people remembered our ride, since they came out afterwards and discussed the white arabian that looked so nice. We also got a comment on our positive attitude:-). 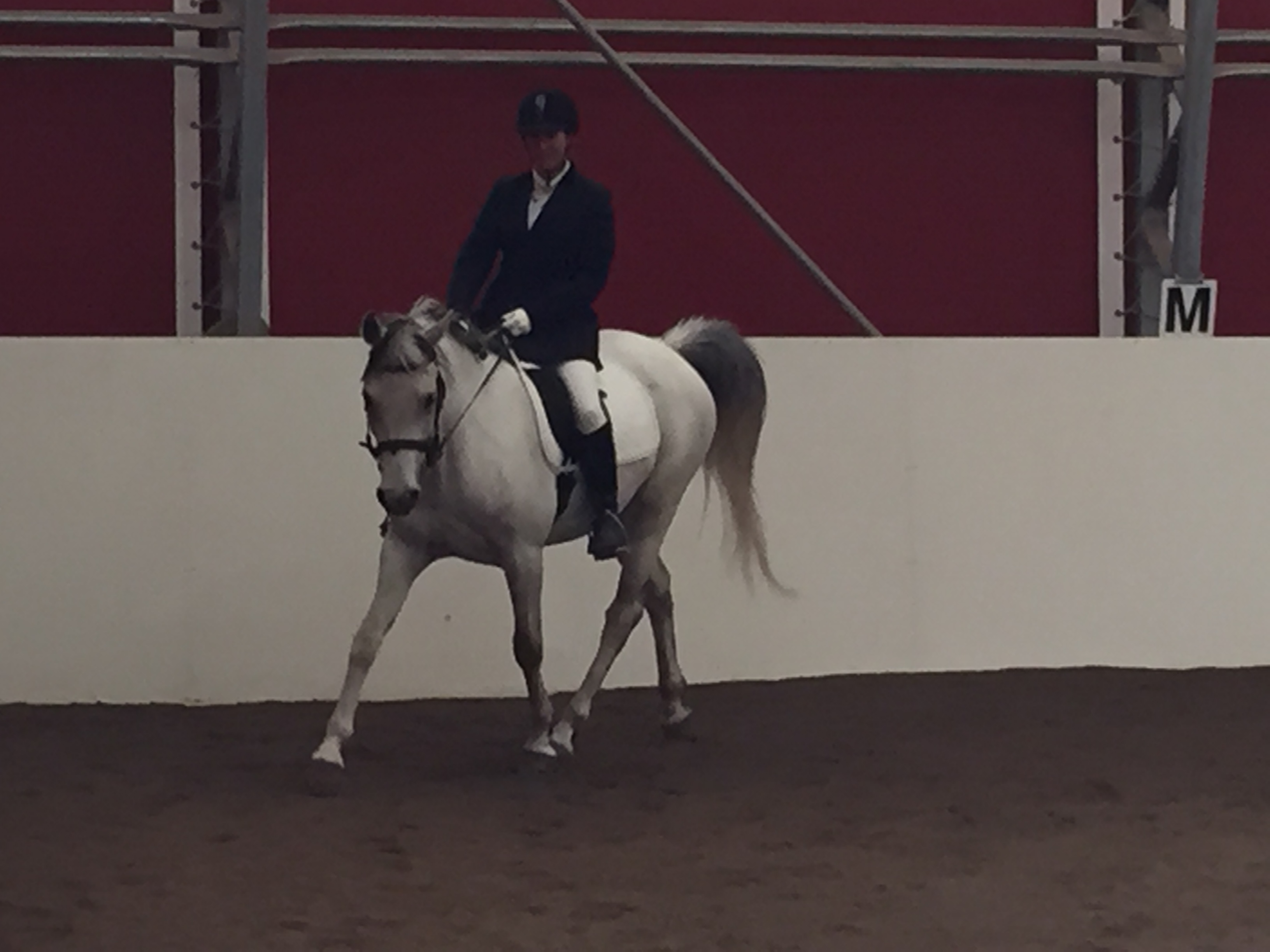 On Sunday it was time for show jumping. I was actually more nervous about this, mostly because we had only had one practice run before the competition. Before that we haven't jumped a single thing for almost four years due to her injuries. We were not ready for this, to put it mildly. The height was a whopping 50 cm, which feels like a large house when you haven’t jumped for years.

Nemah seemed a little confused this morning; saddle again, the food slave here early for the second day in a row - this is not normal! She also seemed a bit negative to the whole thing during our walk to the competition. But as soon as I climbed onto her, her whole demeanour changed. All of a sudden she turned into space rocket Nemah, ears pointing forward and with a lot of energy. We tried jumping the small fences in the collecting ring and she did it really well and with a very positive spirit. We then got to try two of the fences in the arena and same thing there, she jumped like she's never done anything else. And we were ready to compete. To win you needed a clear round and be the fastest one around the course. My goal was to have fun and hopefully produce a clear round. Nemah had a totally different approach: let’s go as fast as possible and fly over all the fences. Due to Nemah’s goal we got a third place. I really love this horse.

We jumped so fast the camera didn't really catch us. 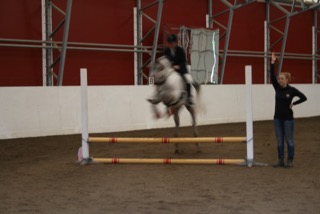 However, on we did get stuck on film.

Whilst waiting for the class to end a spectator approached us and started praising Nemah. She started with “you really need to get out and jump more on that horse, she is amazing". She then said "she jumps really well, with her back up, and what a head! Promise me you will get out on more shows!”. Getting all this praise felt wonderful, even though I just told Nemah what to jump, she did all the rest! Lovely horse! 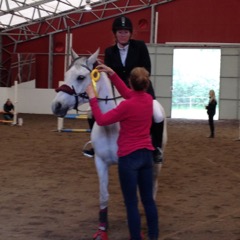 Another thing that felt really wonderful was the fact the Nemah jumped every fence without hesitation. When we junped four years ago she hated it and did whatever she could not to jump. This of course was due to the pain she felt in her hooves, a pain that now seems to be all gone!

I have always known that Nemah is an amazing horse and now people around me are starting to notice it as well.