Since the last time I have bought a candy bag to keep the candy in, sadly I haven't had much time to practice with it. Mille has really understood the target and when he thinks a break is over he goes to it and touches it. I have realised why the stop sign of my hand on his withers didn’t work - Mille really hates it. Maybe he has been bitten there by a larger horse or maybe he just sees it like a display of dominance. Anyway I have stopped trying, since it is important that the clicker is fun and not filled with negative feelings. I haven’t been able to click with either one of the horses in the outdoors arena due to the tasty grass. 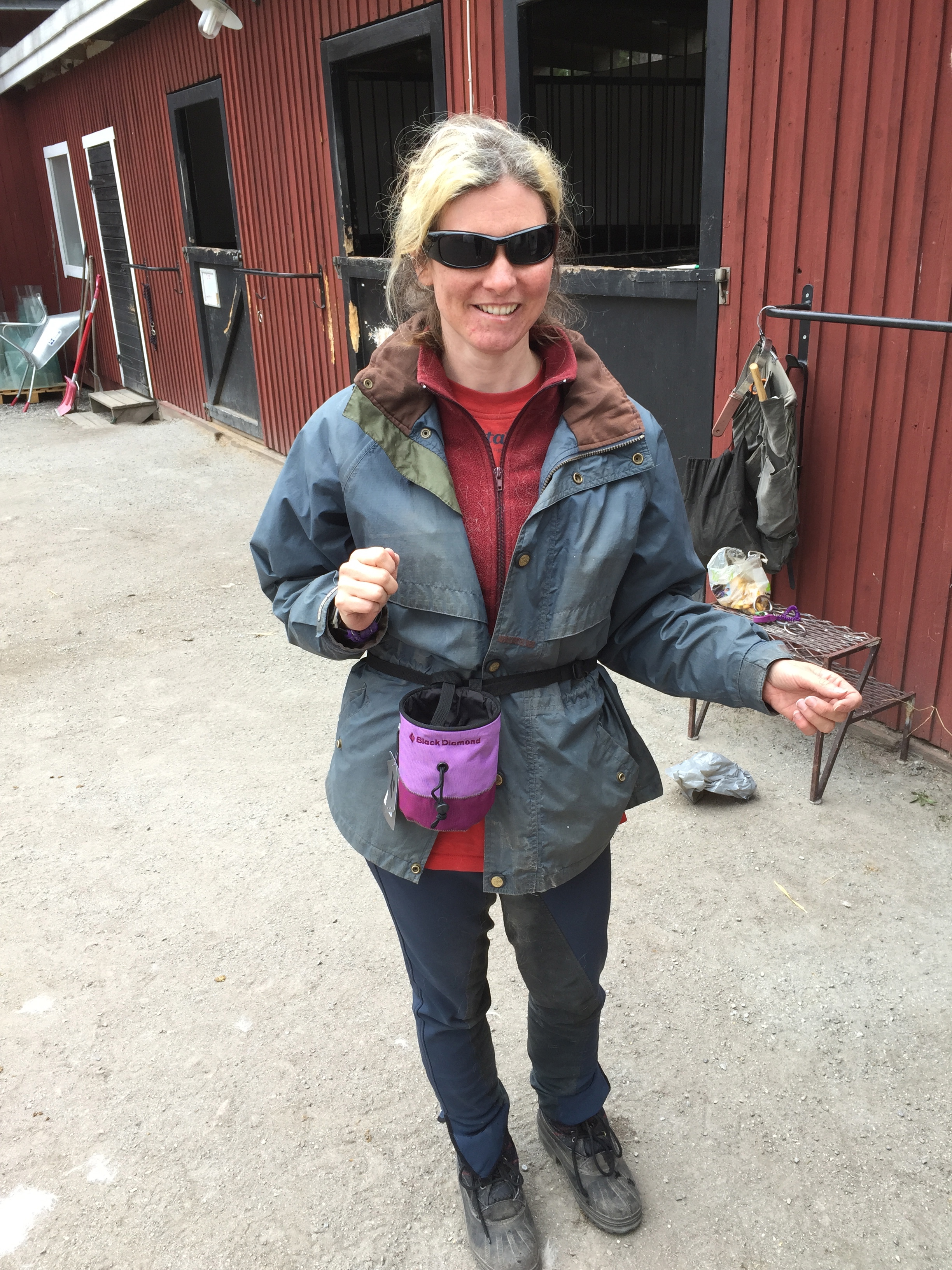 As soon as I let Mille go he went for the grass. We tried with carrots and grass but the self pick of grass was much better; food for no effort. We quickly decided to put the halter on and play with Mille that way. As before Carolina wanted to see what we've been up to since the last training. We started with the lower the head command, something Mille did with splendour.

We also showed the standstill, which works almost all the time. Mille has also learned to take the candy nicely, no more wounded fingers!

We discussed the next safe thing to try out. We decided on teaching him to back away from me. This can be done in different ways. You can either use your body and click when the horse back up or you can use something called protected contact. By that we mean a way to keep the horse away from me, for example by putting the horse on the other side of a fence.

We put up a fence between us and then we waited for the correct behaviour to appear. He first tried turning away and then walk forward to sort of make me give him candy. He used the I'm so cute look, which usually works. He bit the fence and at last he moved a millimetre backwards with one hoof. He immediately got a click and candy. We tried it again for a couple of times and then he thought it was time for a break. 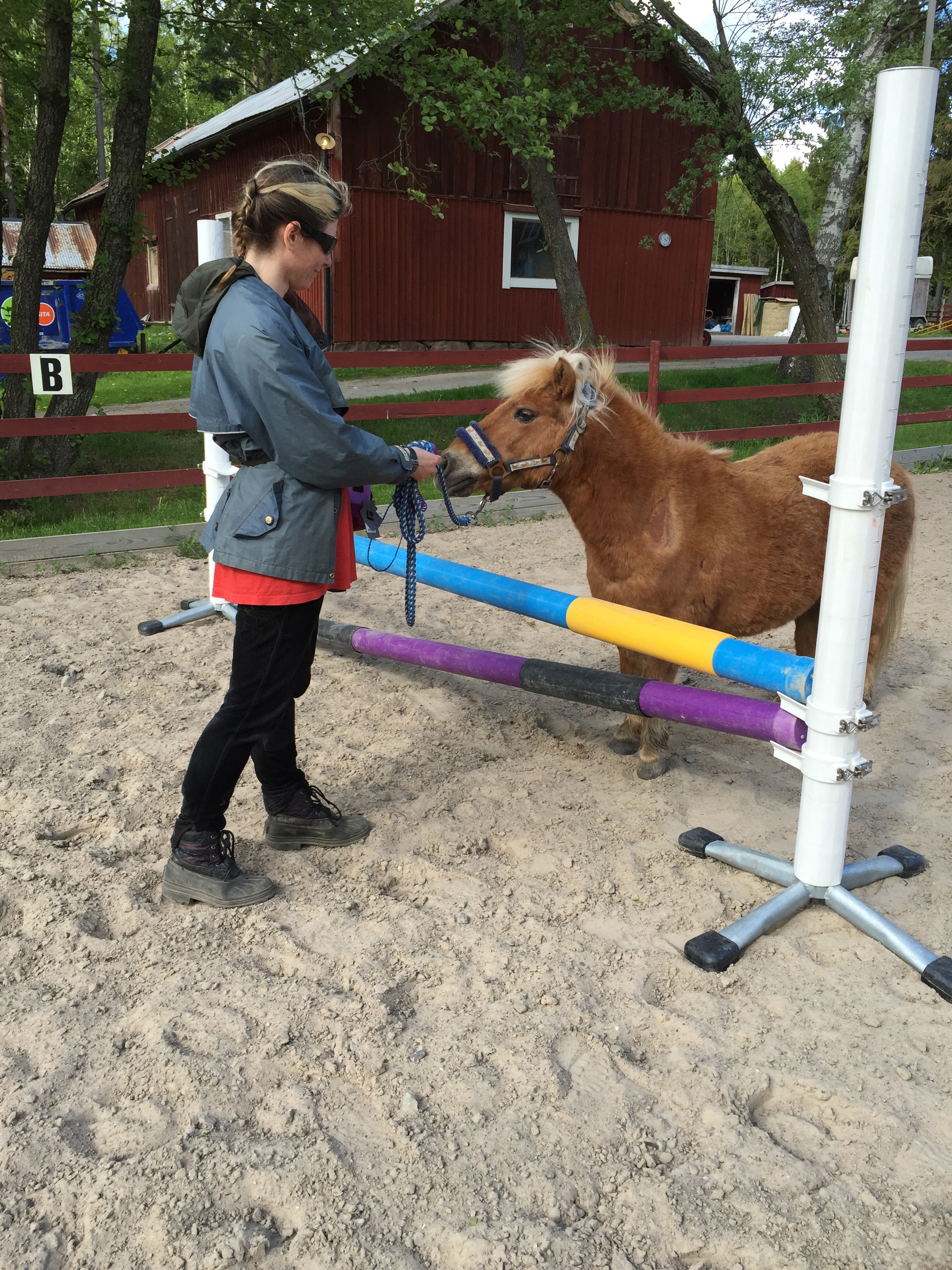 After the break we continued the backwards training. It took a while for him to understand but when he did, he did it really well. When he understands this perfectly, the next step will be to add a signal to the behaviour. That won't be done until we see a steady improvement in the behaviour. One way to measure how well the horse understands is to measure the latency between the repetitions. When the horse does several steps at once without hesitation or he does it so fast that you click all the time, then you know it’s time to name the behaviour.

The last time Mille backed up really nicely and got to go back to the paddock and I fetched Nemah instead.

Nemah has been really negative to the bit training I told Carolina. She thought we should start with the bit and all of a sudden Nemah just took the bit exactly like we wanted her to. She does however get easily bored and goes for the grass instead. Carolina suggested that we shouldn’t do the bit training for more than about 5 repetitions since Nemah really doesn’t like it that much. The funny thing was that Nemah took a break after 5 repetitions every time.

Since the bit worked so well we wanted to try something new. I have a dream of showing Nemah on show for arabians, but I don't know how to get her to stand correctly. 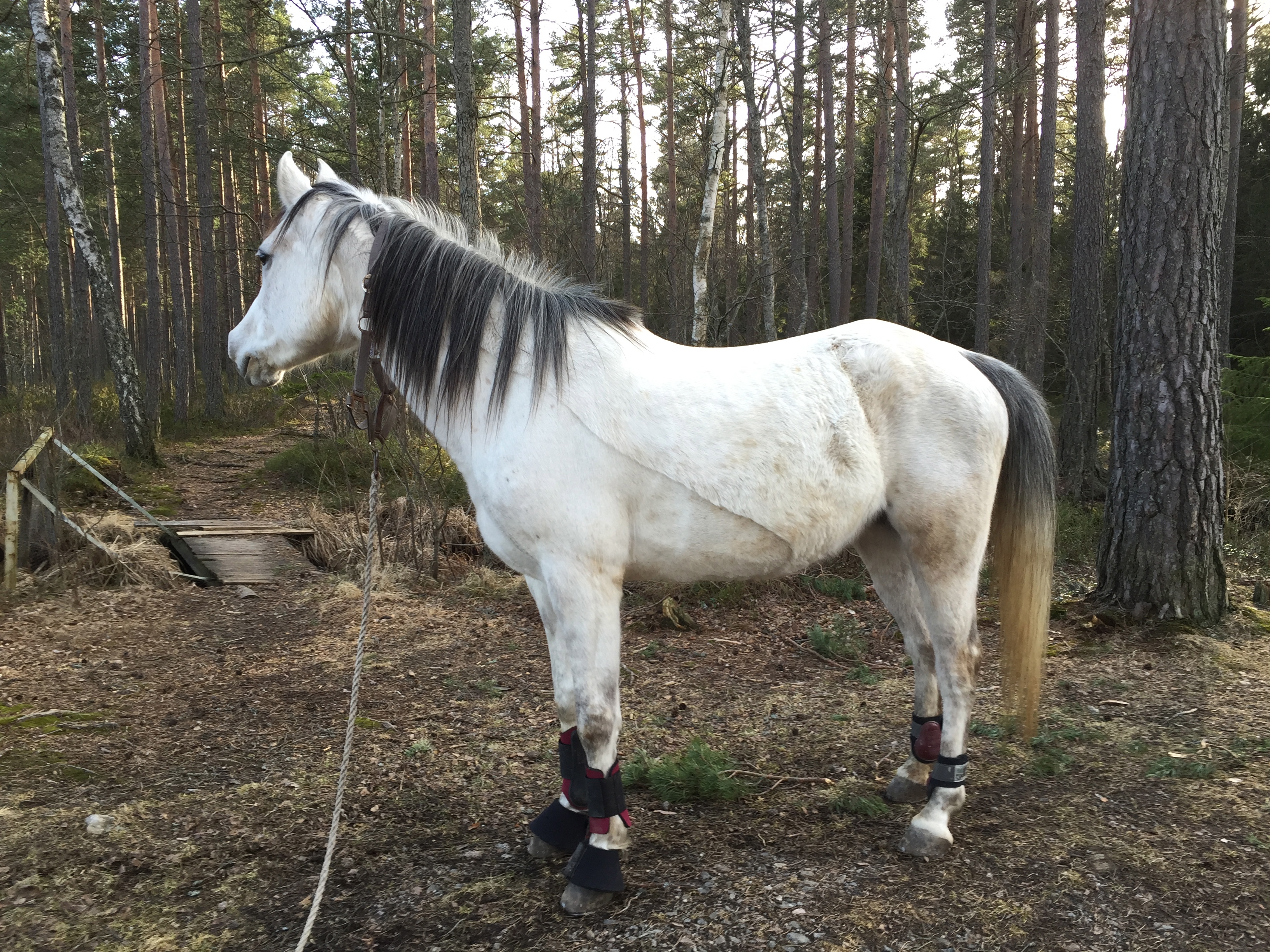 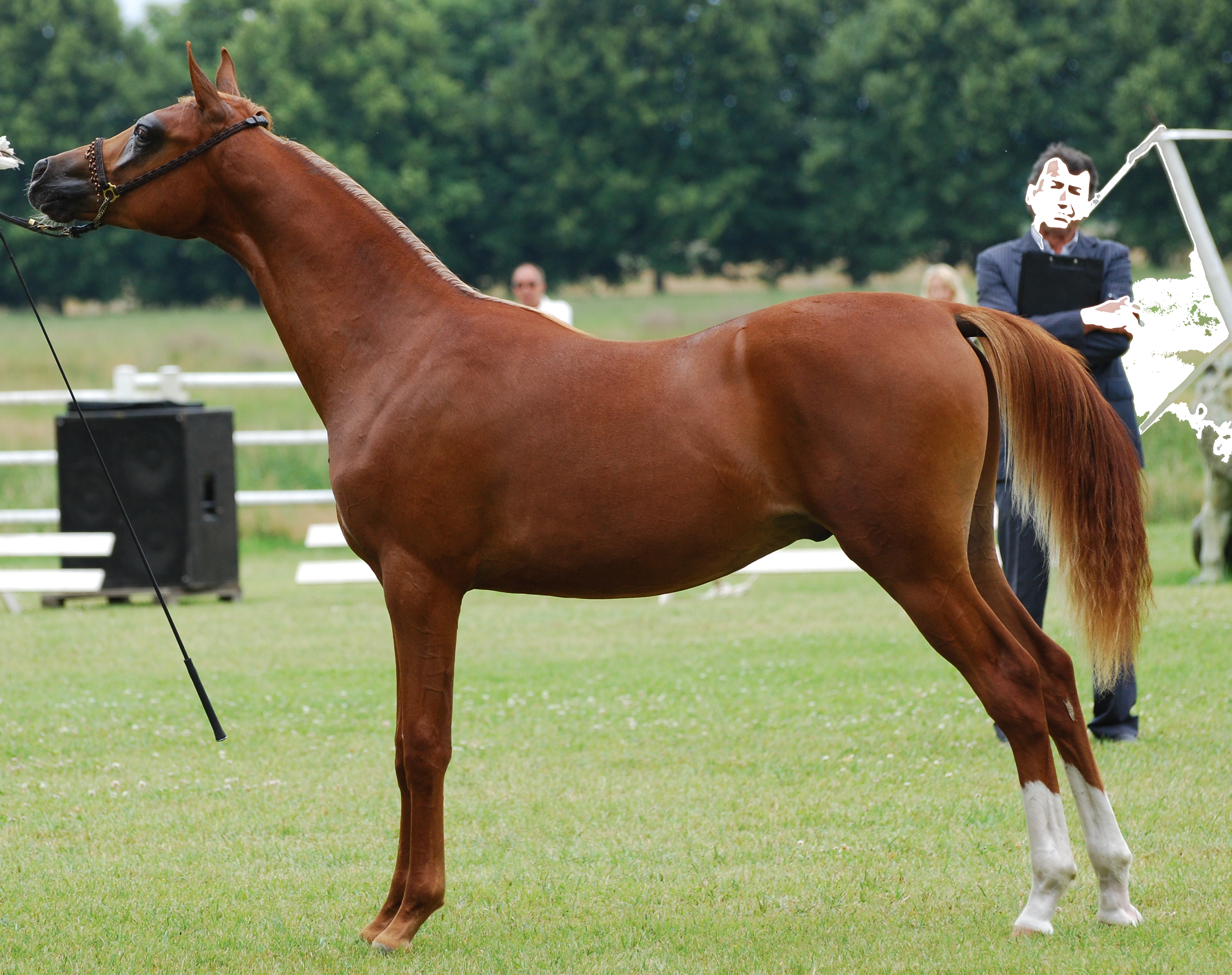 Standing still she already knows, thanks to Malin, but bending the neck and getting her head up we haven’t tried. Carolina emphasised the importance of breaking the behaviour into smaller pieces and we will start with the rounded neck. To get this I use the stand still signal and when Nemah is still I give the treat close to her shoulder and upwards so she needs to bend the neck. If Nemah stays curled up she gets more candy. This worked like a charm; Nemah is such an easy horse to work with. We did this a couple of times and then the lesson was over. One good side effect from this curling of the neck was that Nemah moved her weight a bit more to the back, which is something we want in riding. Maybe I can get benefits from this when riding as well?

One thing I have noticed is that both horses are more talkative. They tell me when it is time for a break, but in different ways. Mille loses his focus and gets frustrated and Nemah simply walks away. This emphasises the importance of always listening to the horse. When they want a break, you take one. Most of this training should be based on voluntary actions from the horses, sometimes though you have to get them off the grass to get any training done at all. 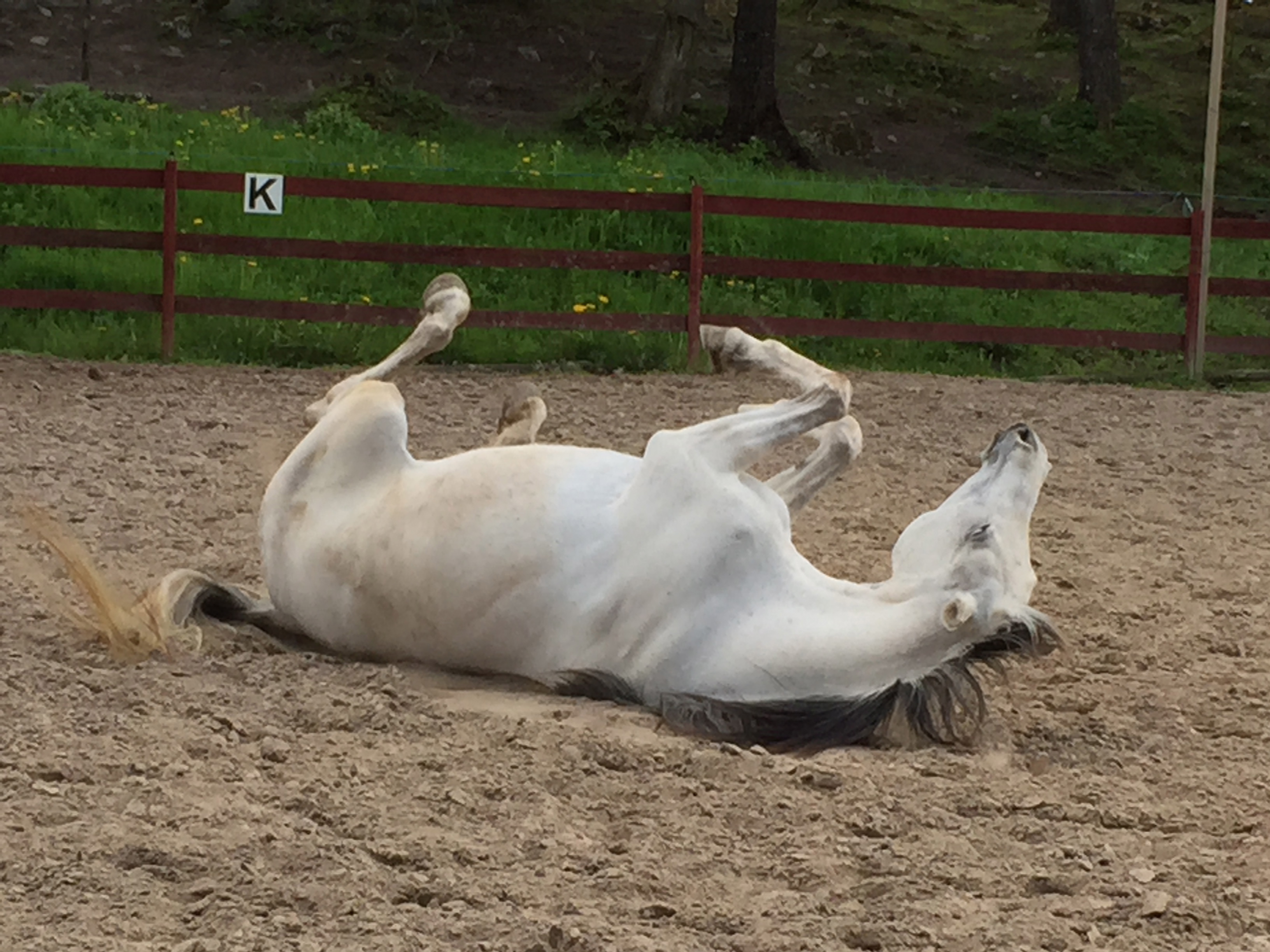 Mille has gotten a lot more easy for me to handle, I now reward the behaviours I want and ignore those I don’t want. He really wants to please me and he seems to enjoy this form of training. He also seems to notice that we listen to his wishes. He actually gets to think about what it is I want him to do, you can see his brain working. I have not been able to teach him to sit yet, but he has started to get new better behaviours instead of the biting and kicking.