Since the last clicker training, me and Mille have continued the training by ourselves. By doing so a couple of issues have emerged and I brought them up when our trainer, Carolina, was here again.

The biggest problem we have right now is that even though I’ve really tried to make Mille understand that the target means work, he still sees me as a candy slot machine. Every time he sees me he turns into an "Audrey plant" screaming “feed me” over and over again. He has also started to show signs of frustration when he doesn’t understand what he is supposed to do to get a treat. Lastly, his eating habits needs some work, giving him candy is a danger to my hands - he almost attacks the hand to get the candy.

We started with the simple things, like him coming to me when I showed the target. This worked like a charm. After coming to me we practiced the standing still with the head straight forward. I was a bit tired and couldn’t get the perfect timing which made Mille frustrated and angry. So we changed our approach from click and a treat to a click and a continuous supply of candy, as long as he kept still. This worked really well, he understood quickly and we took a break where he started with trying to join us outside the arena and lastly gave up and tried to find something edible in there instead.

Mille when I come in to the arena, he immediately comes to me, looking for candy. 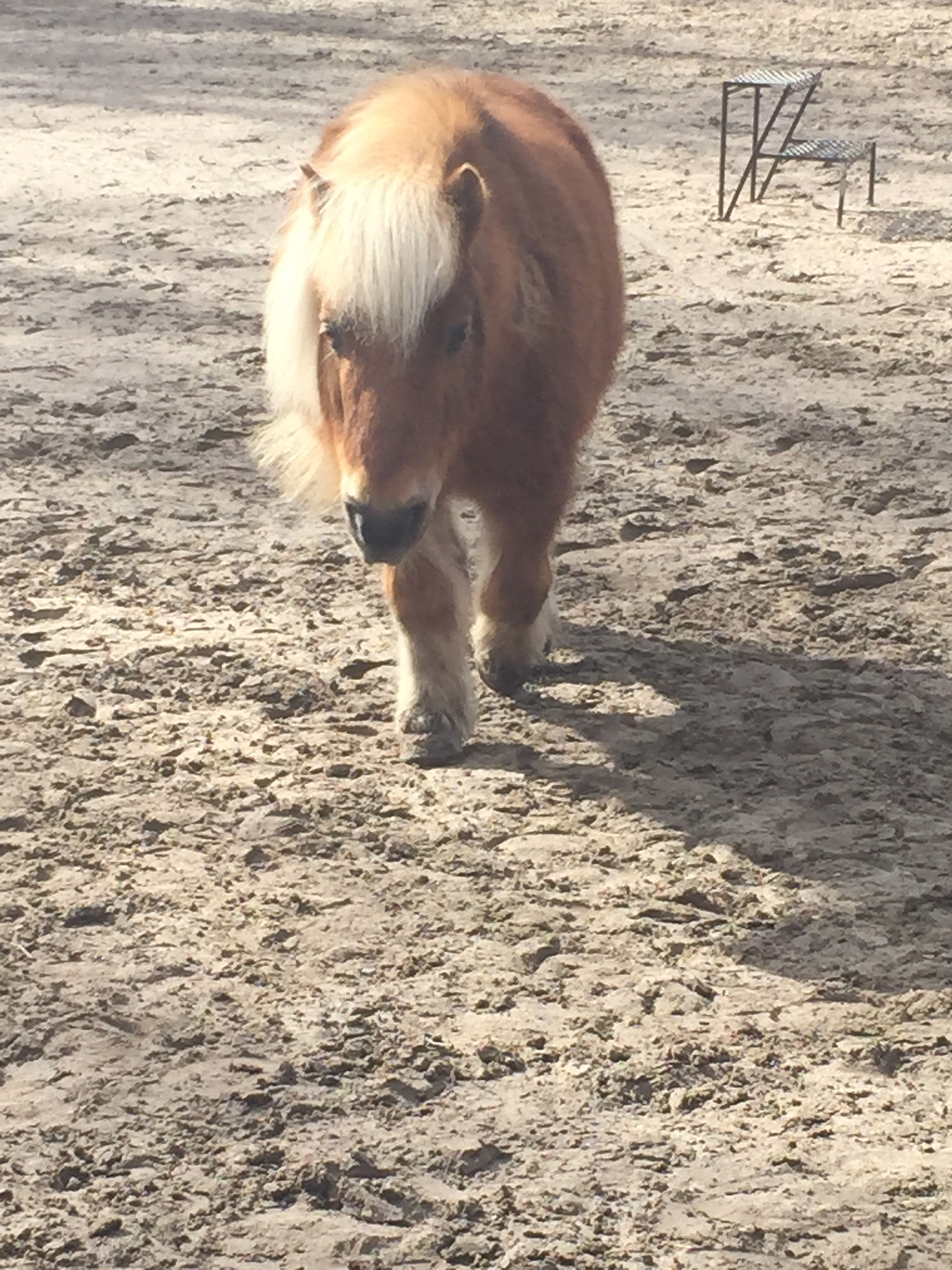 This is how we want Mille to behave when I enter the arena. He does what he wants until I show the target and calls his name. 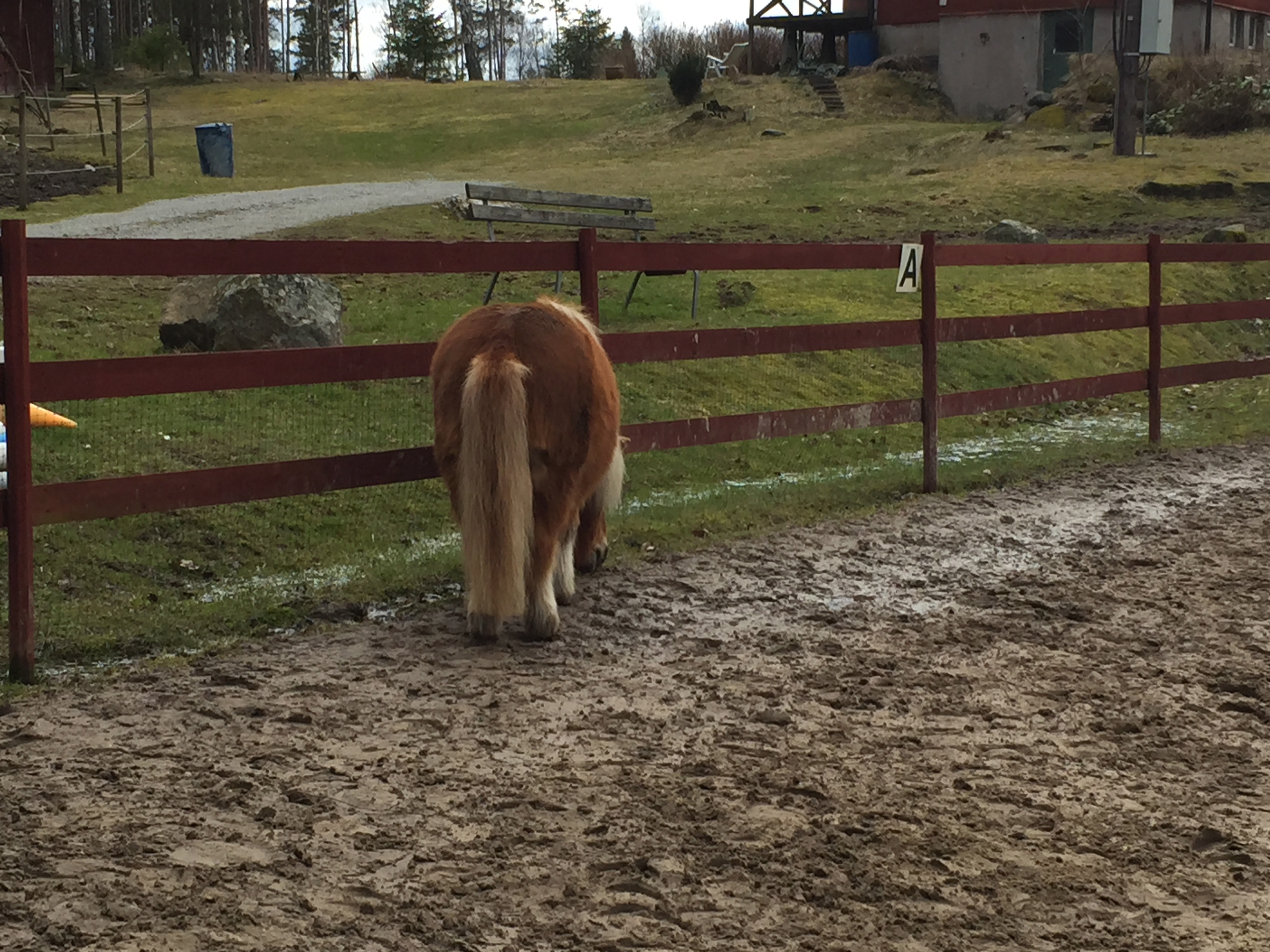 After the break we tried with the click and one treat and you could really see that he now understood completely what to do. When he was standing totally still he tensed his nose and looked really concentrated, an easy sign of when to click and treat. The next step from here is to make him stand still for longer periods or adding behaviours to the stand still.

We wanted to try and connect another behaviour to the standing still. The lower his head on the lower command seemed like a good idea, since he's been doing it so great when we trained by ourselves. But here we hit an obstacle; Mille is used to me being on the side when standing still and me being in front of him when lowering the head. Even though he understood the command a couple of days earlier, he now got confused. My first instinct was to repeat the command until he lowered his head, but doing so introduced the risk of changing behaviour for the command, so we took a break instead and discussed the next step.

We decided to address the “attack the treat” and “human equals candy” issues instead, since they became more and more painful. My feeding hand was already red from his teeth and even though he is a small horse he still has a rather effective set of teeth. We also needed to make him understand the starter and ender of a session.

To make it more clear to Mille that it is the target that means work we tried standing in the arena without the target. We quickly realised that this was not a good idea, he kept on biting and gnawing and pulling our clothes with his teeth and we changed approach again. We now tried a thing called “take nicely”, the purpose of this exercise being to show Mille that even though there are candy in a closed hand, he can’t get it until he removes his head from it. Once he gets the candy we almost force it into his mouth with an open hand, pulling the hand upwards. Again my bad timing made Mille frustrated and we took a break and changed our approach one last time.

This time we used the nose-target, I held it in my right hand, in my left I had candy. To get the candy he needed to touch the target with his nose and when hi did I clicked and quickly gave him the candy over by the target. Mille understood this really fast and we quit here to end on something positive.

We discussed the fact that the pieces of apples I used as treats was a bit to powerful a motivator and I should probably try using something less appetising, like hay.