This will be a short series on my ventures into the land of clicker training. Clicker training uses positive reinforcement to reward wanted behaviours. When the animal does what you want you click reward it, usually with a treat but some animals work equally good with getting to play with a ball or being scratched. 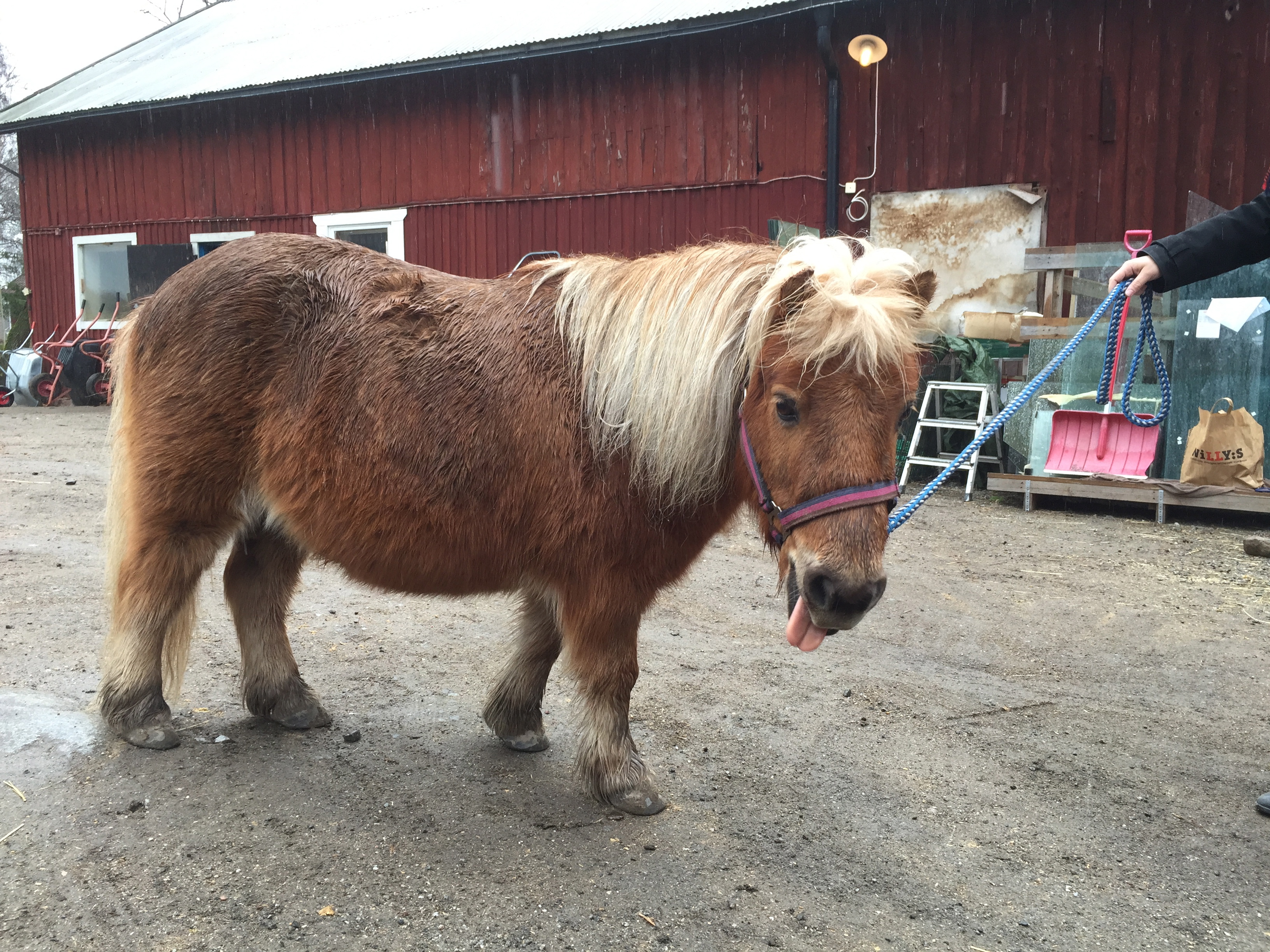 I’ve signed up for a series of clicker trainings for horses. Since Nemah is already signed up with her co-rider I borrow the stable mascot; Millennium, aka Mille, a 88 cm high (low?) shetland pony. Mille is a gourmand, he loves food, he lives for food, he even goes by the nickname OmNomMille. He also likes to bite people. He has never been clicker trained and I have only tested it therefore we decided to start with the simplest things.

There are some important things to keep in mind when using a clicker for training. One is that you should start with simple and non harmful things since the first thing the animal learn is the thing they will try out when they don’t understand. This is called a default behaviour. When it comes to horses a good thing is to teach them to just stand still with there head forward, if they try that when they don’t understand no-one gets hurt. Imaging however if you teach the horse to rear and it trues that every time it doesn’t understand, that could easily become dangerous.

Another important thing is to make it clear for the pony when you start and stop the training. We use a target as a starter and some treats on the ground as an ender.

Yet another thing are breaks, you need to keep your sessions short and with many breaks so the horse don’t get to wound up or tired. For this you of course use the ender and starter signals.

After this it is mostly a question of timing with the trainer. The least thing the horse does correctly gets a click and a treat and after enough repetition and timing the horse has learnt a new behaviour.

Anyway, back to the training session. The first thing we wanted to work on was his biting habit. For this we wanted him to stop trying to get the treats out of my pocket when I stood beside him. At first he went straight for the pocket where I kept the treats in a plastic bag. When that didn’t work he tried gnawing at my hands, biting the jacket buttons and lastly he gave up and moved his head away from me. Immediately he got a click and a treat. This was repeated a couple of times, each time he understood more quickly what was expected of him. Then we had a break. I put the treat on the ground and tried to leave him in the arena. He preferred to go with me so I had to leave him in there, alone. For a while he stood in there and just looked at us, in his very cute way, but eventually he left.

Here is another important thing, you can’t go in to the horse and start the next session when he wants to. Had I gone in, the risk would have been rewarding the cute behaviour and that is not what we want.

After the break we introduced the target, a shipping boot. The point here being that Mille should touch the target with his nose, when he does he gets click and treat. I stood in front of him for this exercise. First he tried the head forward, then the pickpocketing and lastly he touched the target followed by a click and treat. A couple of repetitions of this followed and then we took a break again. 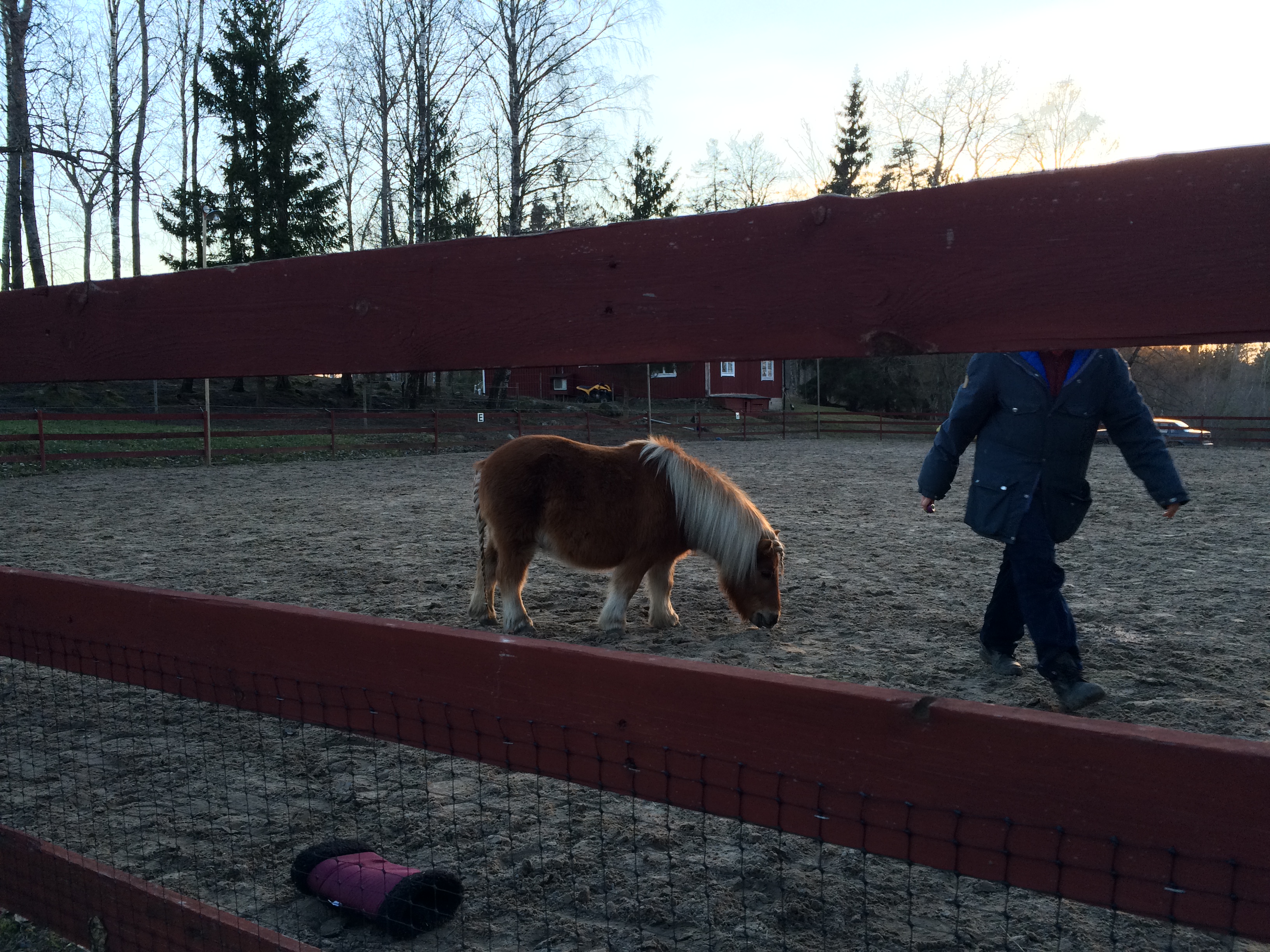 From this point on Mille came to me as soon as I showed him the target, so the next step was for him to lower his head. To not confuse him I tossed the target away as soon as he had touched it. I stood in front of him again and now we used a technique called shaping, which is simply waiting for the horse to do the correct behaviour or any thing slightly resembling of it. Mille first tried the head straight (we can already see him using it as a default behaviour), then waving it back and forth and lastly lower it just a centimetre - I clicked and gave him a treat. After about three more tries he started to lower his head all the way to the ground - amazing how quickly he learnt it! So, another break.

Lastly we decided to try to add a name to the behaviour of lowering the head. We called it “sänk”, which means lower in Swedish. This was where I met my first real obstacle. I started just like before and was supposed to say the word before the click - that was excruciatingly hard for me. I got it right a few times and then we tried saying the word first and he lowered his head!

In this image you can see Mille lowering his head and also the wine red target in the lower left corner. 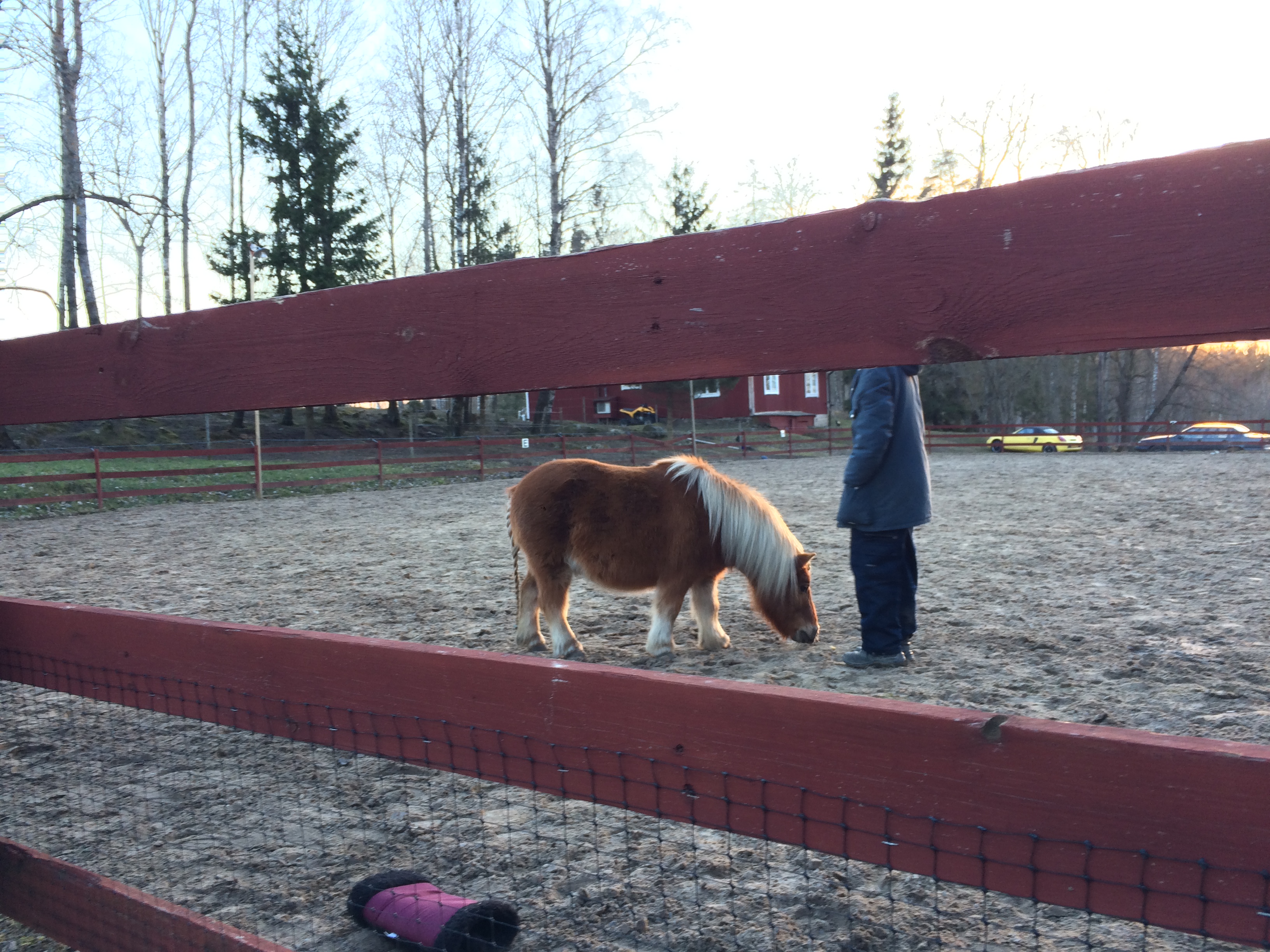 By now you might wonder why you don’t start with the name for the behaviour first to learn it first. If you do it with the word first and the horse doesn’t really understand what to do, you could end up teaching the horse another behaviour than you want.

We ended with this, he got a final break and then I let him out in his paddock again. Both me and the teacher were really amazed by his learning skills. Now all that remains is to see how much we can teach him this spring, I have great hopes for him.