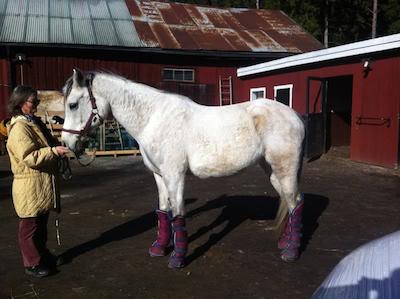 Since Nemah's last visit to the veterinarian three weeks ago we have given Nemah anti-inflammatory medication to ease her pain. Her hooves are better, but the left hoof has been acting up, being warm and the leg has been swollen. Since this is a recurring problem I decided to let one of Swedens best farriers take a look and see if he might be able to help her. He comes to Stockholm once every 2 weeks and work on the clinic we went to last time. Said and done, we went to meet him, and also let the veterinarian take a second look at Nemah. 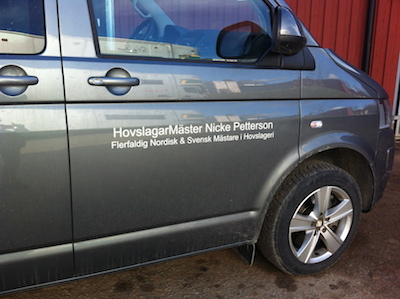 After some running on soft and hard surfaces the vet. agreed with me that the right hoof was better, but the left one was worse. Let's get the farrier to look at it! And then we waited, which is something you can expect when meeting a farrier, it takes a lot of time to get hooves perfect and horses are not always as cooperative as you would want them to be.

I brought with me my ordinary farrier to be sure she also understood the problem and maybe even could help with the solution, if we found one. The new farrier took of the shoes and examined the hoves and angles thoroughly. He opened up the seedy toe even more, there is no idea trying to save the parts of the hoof wall that isn't healthy, so the hole is now even bigger. You can actually see how far up it was opened before if you take a good look. 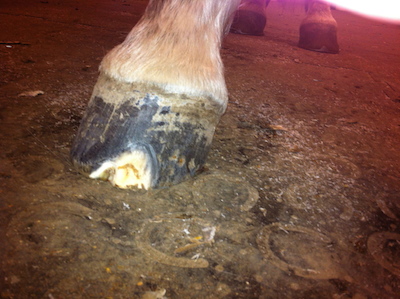 When the seedy toe was all cleaned out he pressed the soles of Nemahs hooves and they turned up up to be really soft and flexing. They should be hard och not flexible at all. When they flex it means that the sole is really thin and very sensitive. With a thin sole it is like walking barefoot, every little stone hurts and a bigger stone can even result in a bleeding in the hoof and that is really painful!

Some thinking and discussion later he decided to put Equi-Pak in the hooves. I have never seen that before so it was really interesting. First he cut out a net in the same size as the shoe and then put the net and shoe on the hoof (the first time he forgot to put the net in between the hoof and shoe and had to redo that hoof. After that you place the hoof on a sticky foam rubber plate. 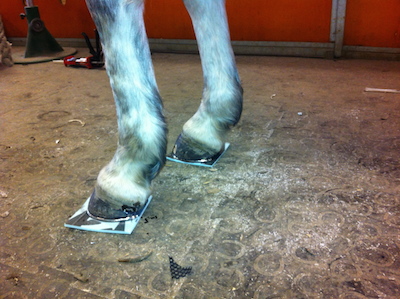 You then put in the Equi-Pak, a kind of liquid urethane. The farrier pressed it in between the hoof and the net and let it stiffen. Once it has stiffen it gives the hoof extra protection that works a bit like the hoof itself would. 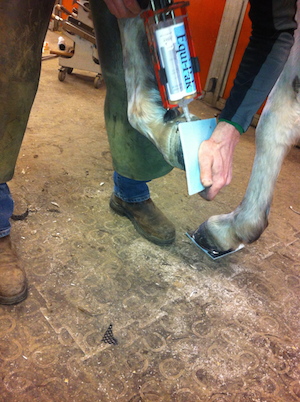 Once the Equi-Pak had stiffen the farrier put some polish on the hooves and Nemah's manicure was done for this day. 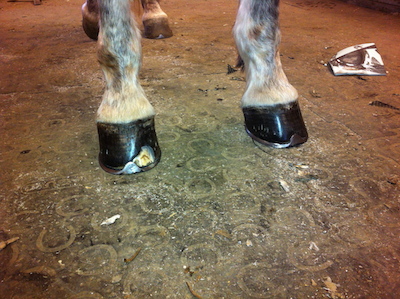 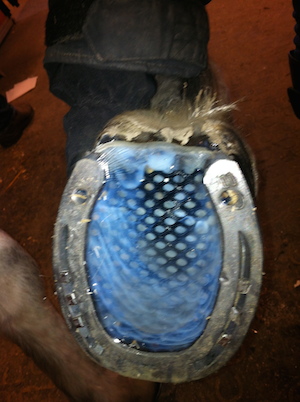 With these new shoes Nemah is hopefully going to feel less pain from her hooves and we can start riding more properly again, which we have to to keep her hocks happy..

As usual, this day would not have been possible without Nemahs private driver, her private groom and of course her wonderful co-rider. I can't even begin to tell how happy I am to have all of them.