Following the Ides of June in the year of 2018, I prepared my first batch of tepache. The process of fermenting pineapple has very little to do with references to the Roman calendar though they did have a propensity for fermenting fish. But I digress.

For the neophyte pineapple fermenter, making a batch of tepache is a delightfully simple process. Remove the crown from a pineapple and chop the rest of the unpeeled fruit up in small pieces, a centimeter or two in size. Add sugar and water before letting the concoction sit in a covered glass jar for a few days. Eventually the brew will display a froth denoting that the fermentation process has begun in earnest. I tend to open the lid of the glass jar daily to let in a little bit of air and smell - occasionally sample - the tepache. After another few days it's time to bottle the tepache and put it in the fridge. After yet another few days, the drink is ready to be had. Serve chilled and enjoy your drink made from corn - the original meaning of the Nahuatl word tepache. In a society where corn is becoming ubiquitous in all food, it's a nice change to make a drink that's heading in the other direction.

In the scheme of brews, tepache is swiftly and easily made. Thus it lends itself expertly to experimentation. Adding spices, other fermenting ingredients, or using a different type of sugar are low-cost, low-effort experiments that can be tried by anyone. No expensive equipment is required. A glass jar with a lid, a few flip-top bottles, a funnel, and possibly a sieve is pretty much all you need apart from the knife to slice and dice the pineapple. A rather egalitarian drink compared to having to own your own vineyard or a homebrewing appliance.

After a number of batches I ended up with the following ritual process.

Now, once you've made your first, plain batch of tepache it's time for the really fun part: experimenting. By switching up the types and amounts of sugar the taste can vary widely. Use different types of pineapples. Unsurprisingly, ripe ones tend to ferment more swiftly than others. But, the prime source for variation is adding something extra, such as muddled lime, minced and mixed chili fruits, or why not a plethora of fruit making the brew an epic fruit salad?

Replacing a portion of the water with something else, such as green tea or coconut milk is also viable. Especially the coconut milk variant has proved to be reminiscent of a carbonated piña colada. Not bad at all.

For my twentieth batch, I decided to celebrate a little by going ever so slightly over the top. I opted to make a "fruit salad" by adding raspberries, red oranges, red grapefruit, pomegranate, a Conference pear, a Pink Lady/Cripps Pink apple, a lime, and a mix of demerara, brown, and vanillin sugar. To avoid unwanted wild yeasts all the fruit was heated and cooled before the pineapple was added. 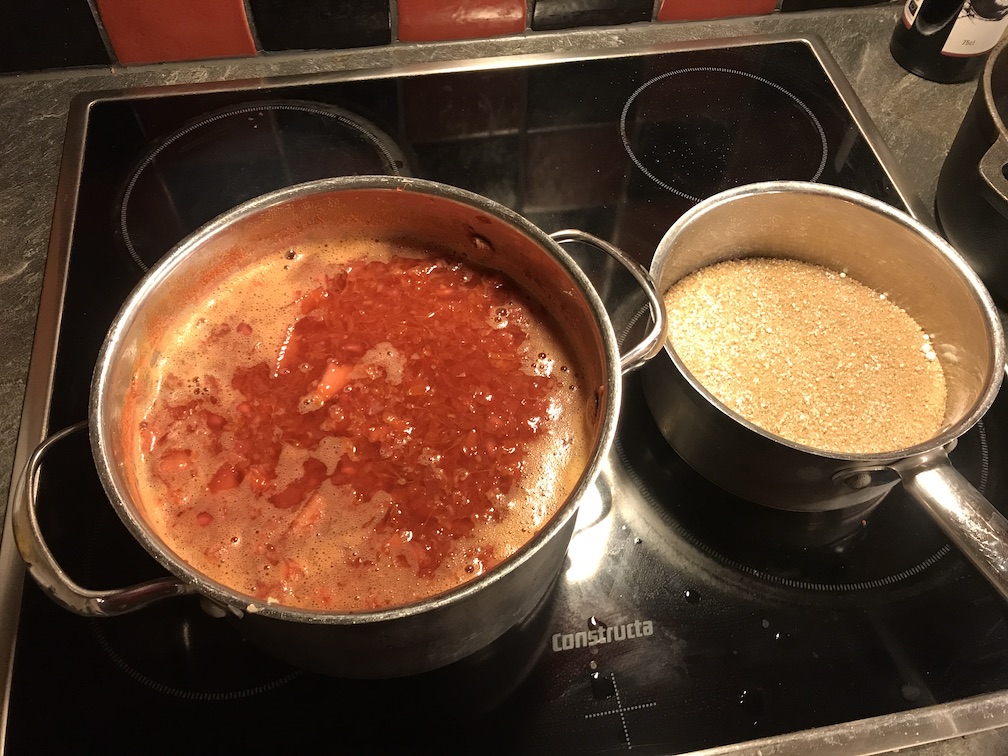 Heating the fruit and the sugar 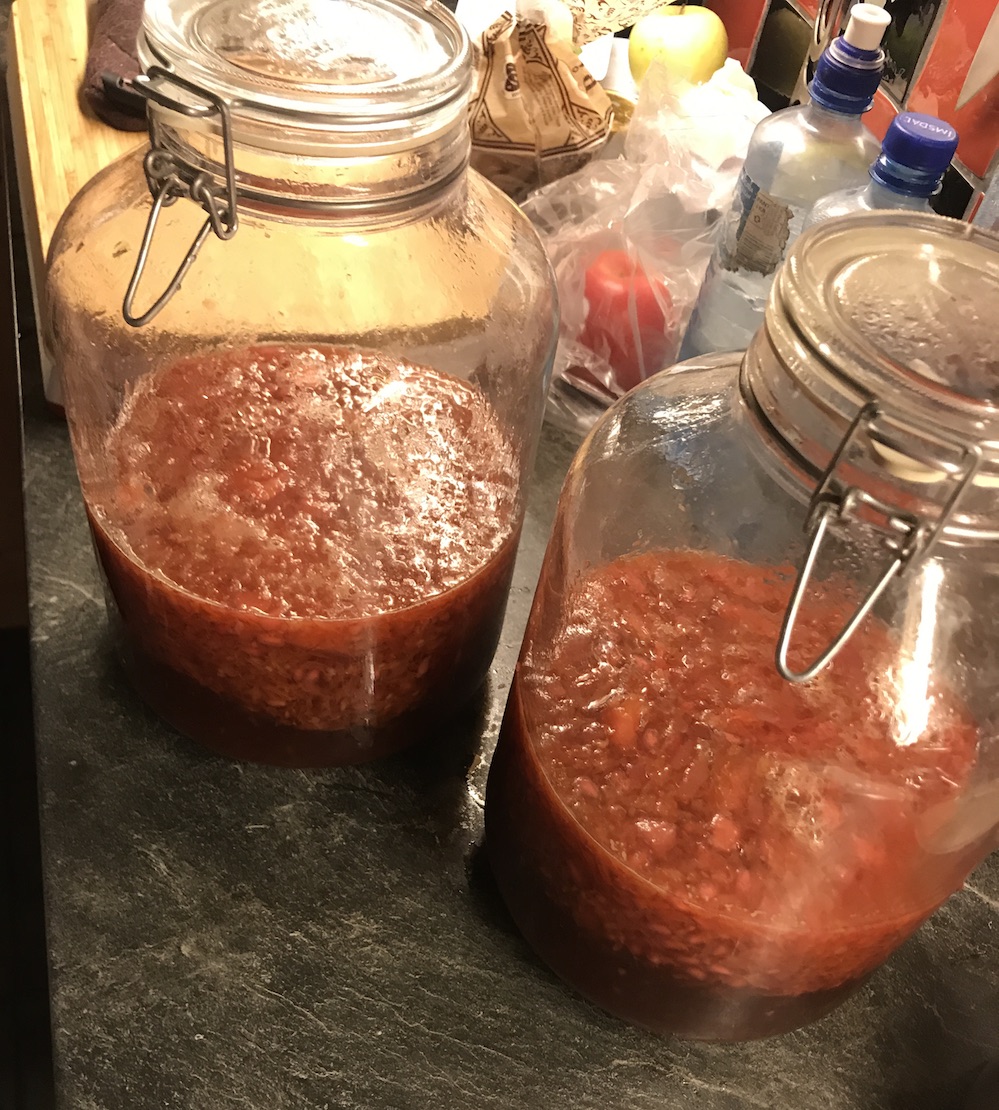 Cooling the fruit, about to add the sugar solution

The main star of the show

I tend to ferment my tepache in a rather sunny spot in the living room, but this is yet another factor to experiment with. After four days it was time to bottle it and the jars moved back into the kitchen. 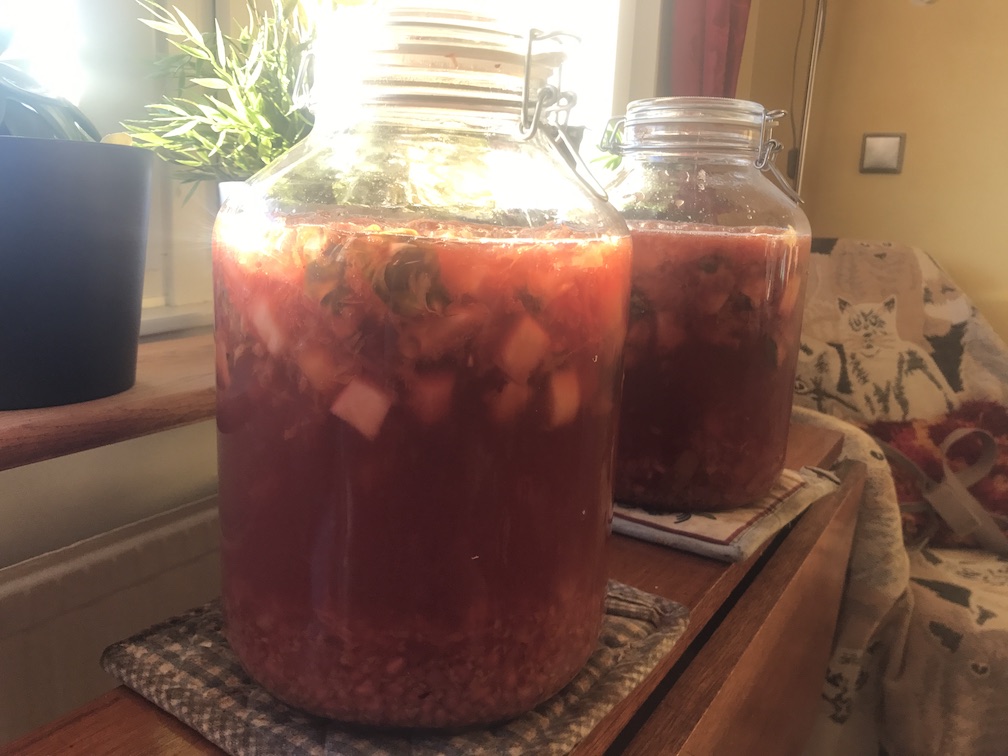 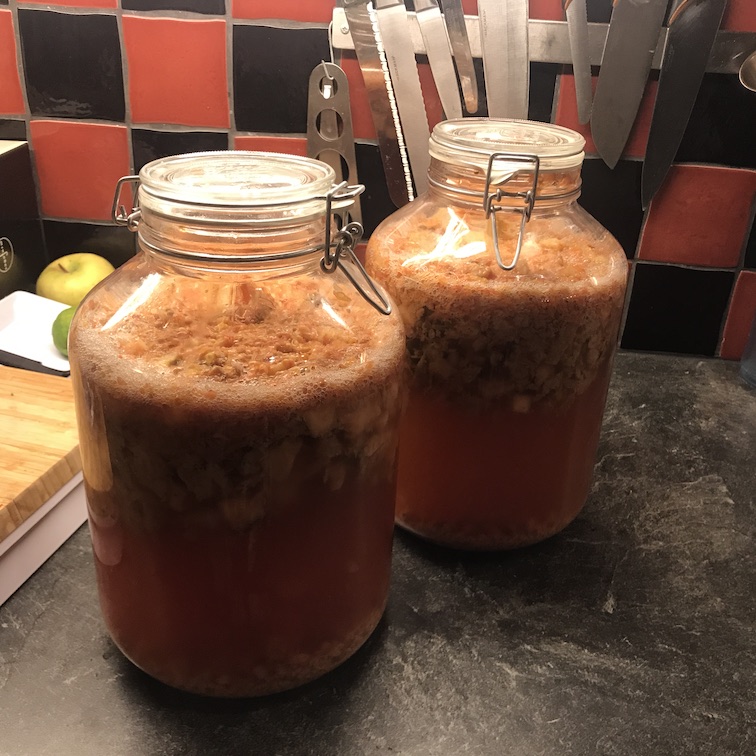 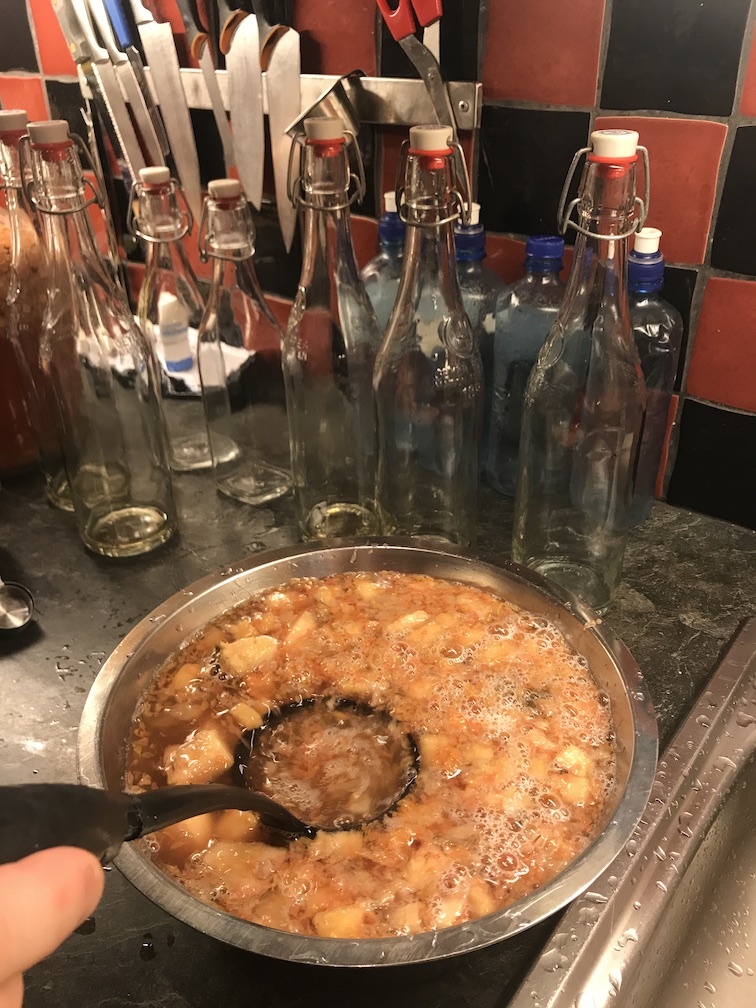 The bottling process is simply a matter of using a funnel and a sieve to pour the fermented tepache into sealable bottles before storing them in the fridge for a few days. 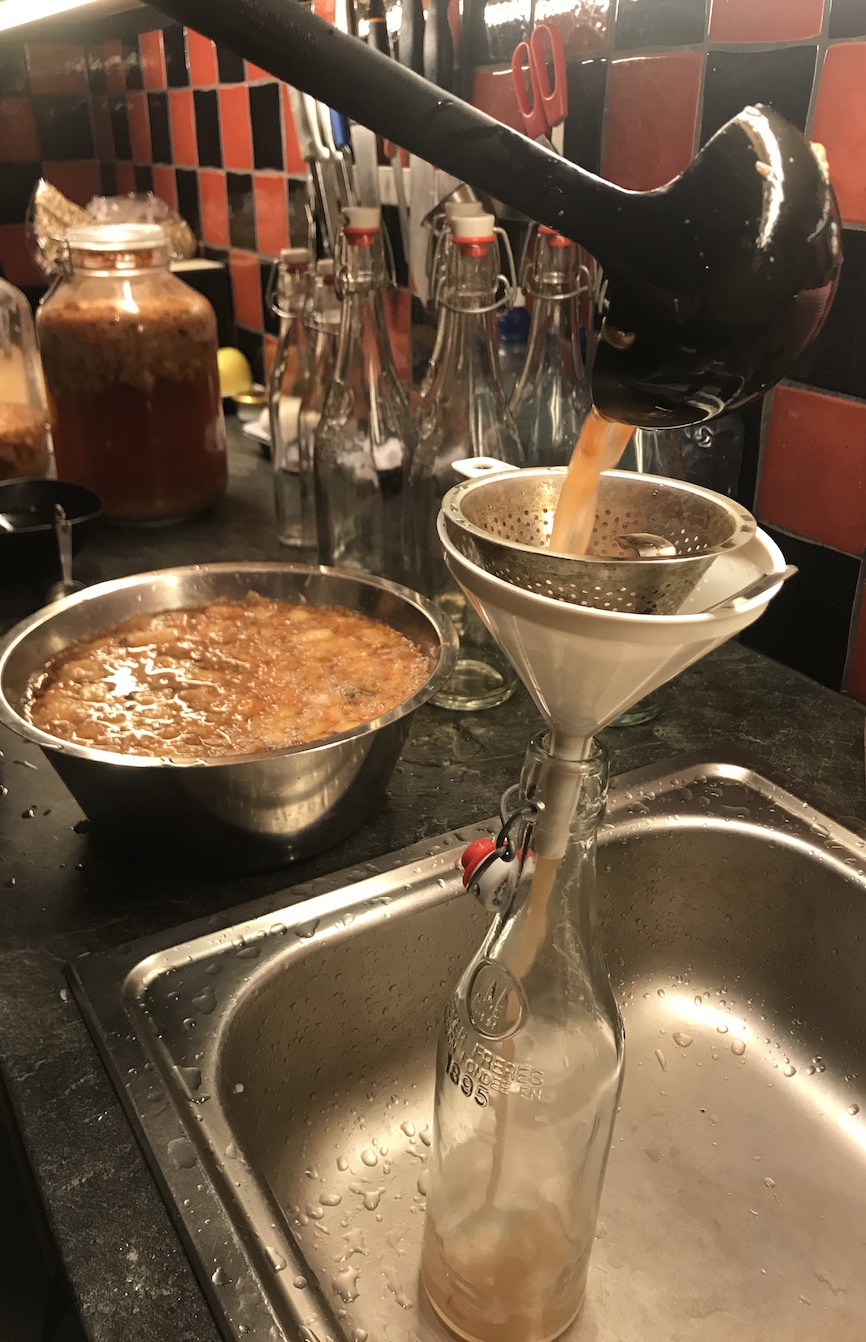 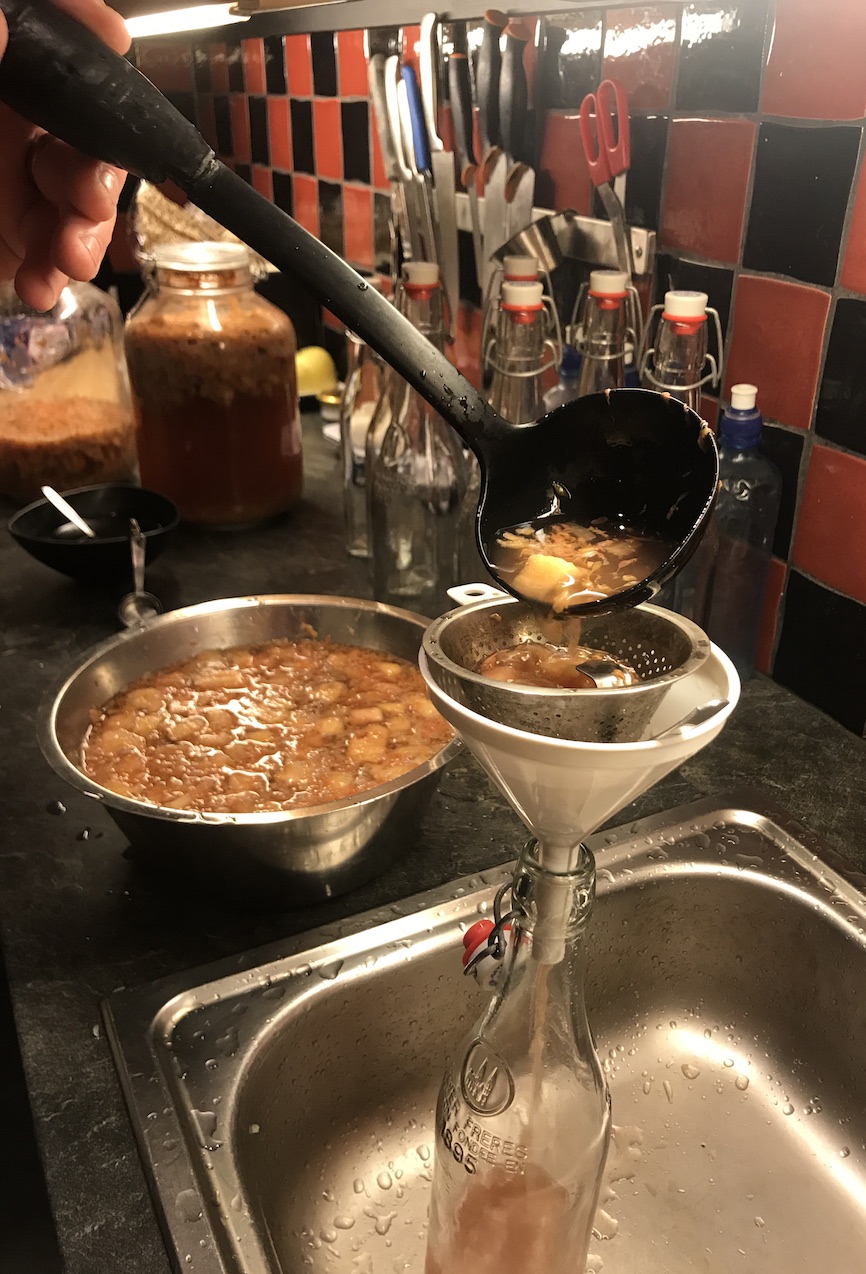 The flip-top bottles is the brewers best friend and I've collected an assortment on sizes. The tiny one pictured below is a liqueur bottle reused to provide a small sample for a colleague of Kim's. Counting the depicted bottles you can see that a batch yields a bit more than three litres. 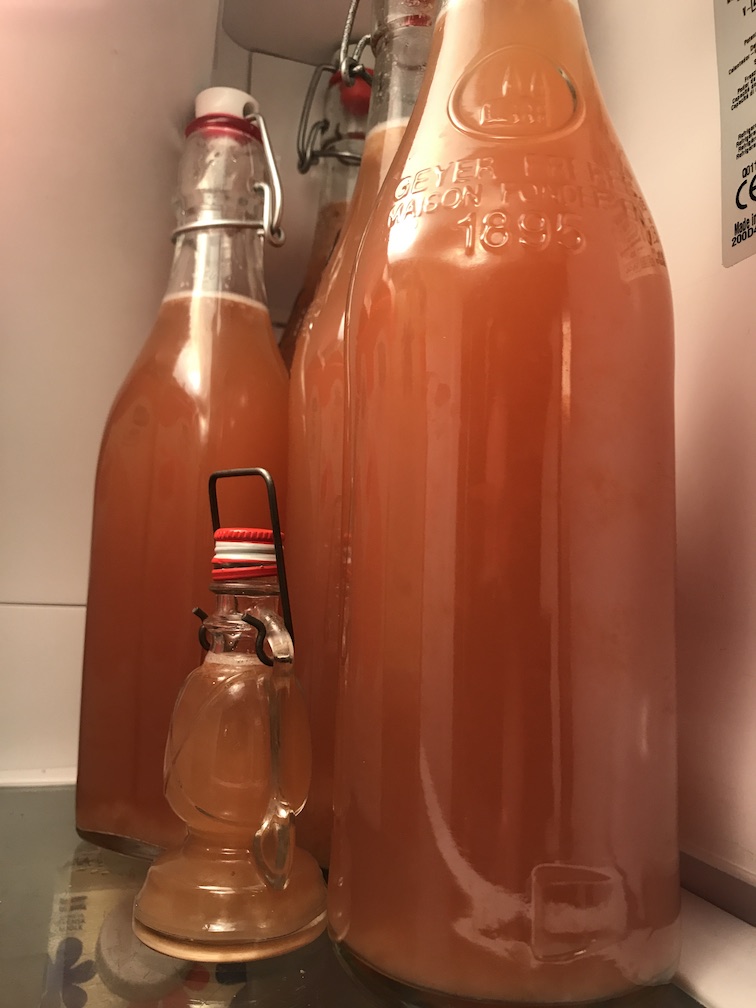 And that's pretty much it. Enjoy your tepache and don't blame me if you become obsessed with making pineapple-based brews to the detriment of all other things in your life. Oh, and say hello to your new, ever-present pets: fruit flies. 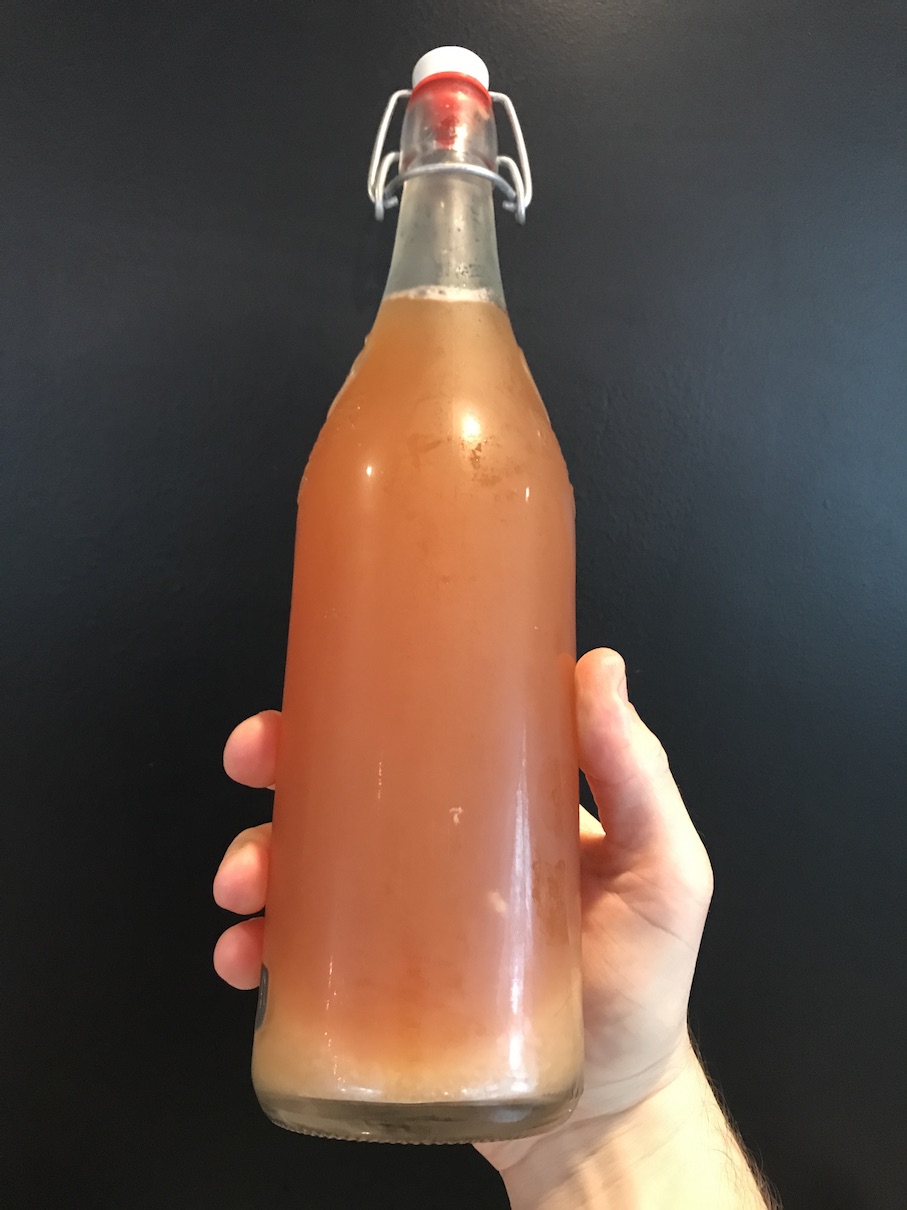 Expecting some sediment is the right sentiment 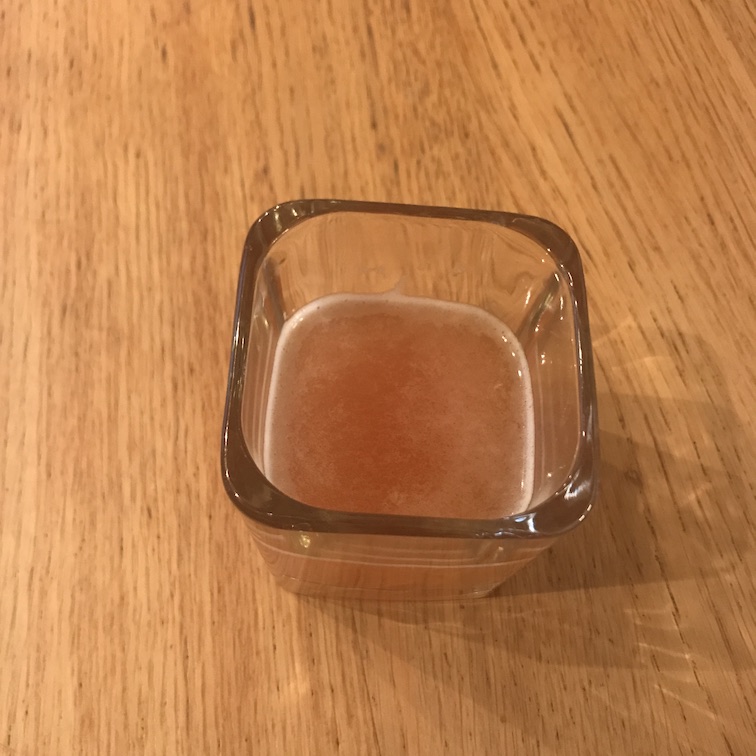 Since the celebratory twentieth brew I've made another six brews, of which the crowning jewels are the chili-based ones. The ghost pepper version was especially fine, burning like the love child of a pineapple and a volcano. Next time I'll leave the chopped ghost pepper in the fermenting brew for more than just a measly 24 hours...