This is a retrospective format that I tried out when facilitating a sprint retrospective at Auctionet during my recent journeyman tour visit there.

The overarching goal of this retrospective format is to highlight mostly positive things while still leaving some room for identifying things that can be improved. The end result should be strictly actionable items that the team can undertake during the next iteration.

While we don't live in quite such menacing times, the use of the word "weapons" might not be suitable in your context. If so, feel free to substitute it with something else. The recurring use of "mass" is intended to emphasise that we value team-wide productivity and satisfaction over individual.

Use post-its of four different colours. Prepare each participants place with several of all but one of the colours, of which only a single post-it is necessary.

Mark the center of the whiteboard with a small, but visible dot.

Visualise a huge 'Y' centered on the dot, with each end 120 degrees apart. Mark each end with another dot. Remember to use as much of the whiteboard as possible, while still keeping the dots roughly equidistant. You should now have three sectors of an imaginary circle centered on whiteboard.

From top to bottom, left to right, mark the three outer dots 'WMP', 'WMS', and the bottom one marked 'WMD'. Bonus points for using post-its of same colours as you've distributed to the participants - this will make it clear which colour is intended for which topic.

Warmup by having the participants answer a mundane question, like "what's your favourite computer-related movie and why". If someone answer's WarGames you've got the perfect segue to the introduction of the retro format. Remember to listen to each and every response to the question, thanking for it.

Have the participants write notes on the topic of "Weapons of Mass Production", i.e. tools and practices that aid the team as a whole in being productive. Be clear about which post-its of what colour to use and to use one post-it per item. Allow the participants to write as many notes they want, but time-box the exercise to a a few minutes. 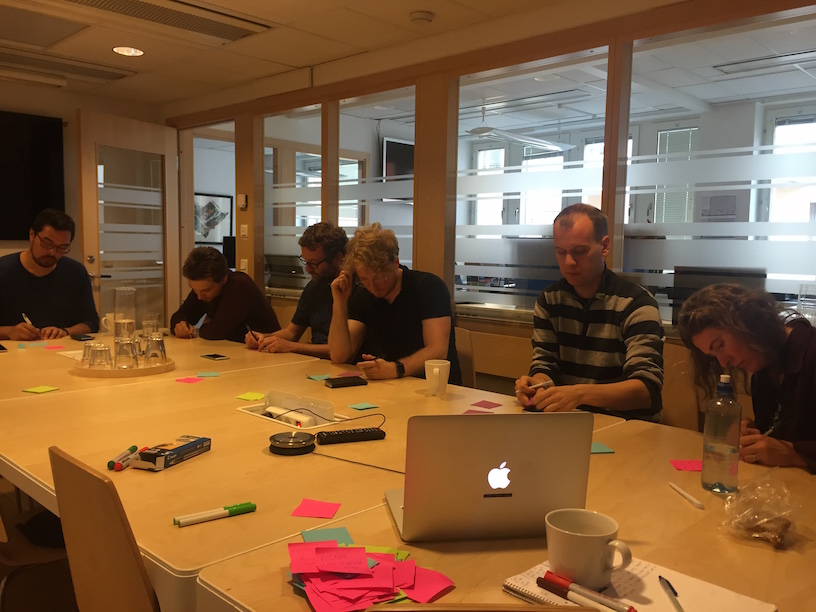 Next, have the participants write notes on "Weapons of Mass Destruction", i.e. things that hinder and hamper the team. As before, indicate which colour to use and ensure that one post-it per item is used. Time-box to a few minutes.

Finally, have the participants write notes about "Weapons of Mass Satisfaction", i.e. what brings joy to their work. Once again, one post-it colour, one item per post-it, and time-box the exercise.

The participants should now have a number of post-its of the three categories in front them. Have them individually select three of each colour before letting them step up to the whiteboard to read aloud what they've written and place each note somewhere on board. Where the post-it is placed has importance as it denotes to what extent the item in question boosts productivity, hampers the team, or grants satisfaction. Keep the tempo up as there are plenty of notes to read and place. 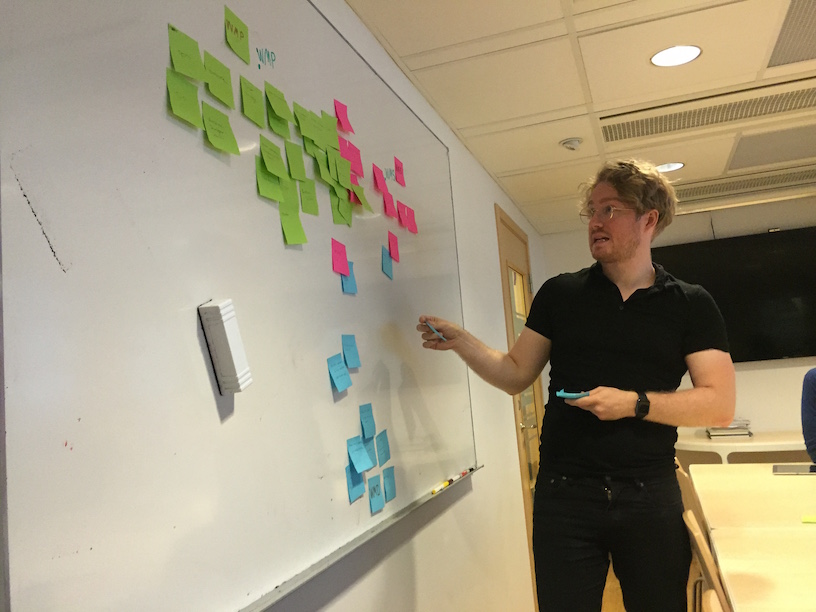 When I first ran this retro, I didn't limit the number of notes to be read and placed to max three per person. It took quite some time to get all the notes up on the board and the board got quite crowded...

This might be a good time to take a short break.

With the notes in place on the board, have the participants look at it and attempt to spot patterns. Are notes clustered or drawn in particular towards one of the three points? Do you have any surprises such as a greatly satisfactory item also being quite destructive?

When running this retro for the first time, a lot of notes ended up half-way between the "production" point and the "satisfaction" points.

Now have the participants dot-vote on the three things they want to discuss further. While a participant has three dot-votes, a dot must be placed on an item in each of the three sectors. Note that one doesn't have to vote on three differently coloured notes, as long as the notes are in different sectors.

Optional rule: A participant may in addition to the above rule only vote on items that are believed to be actionable. That is, the team must be able to actively do something about the item and not just powerlessly conclude that life sucks after endlessly debating it.

This rule is intended to steer a group towards having retrospectives result in actionable things, and not just be a therapy session. 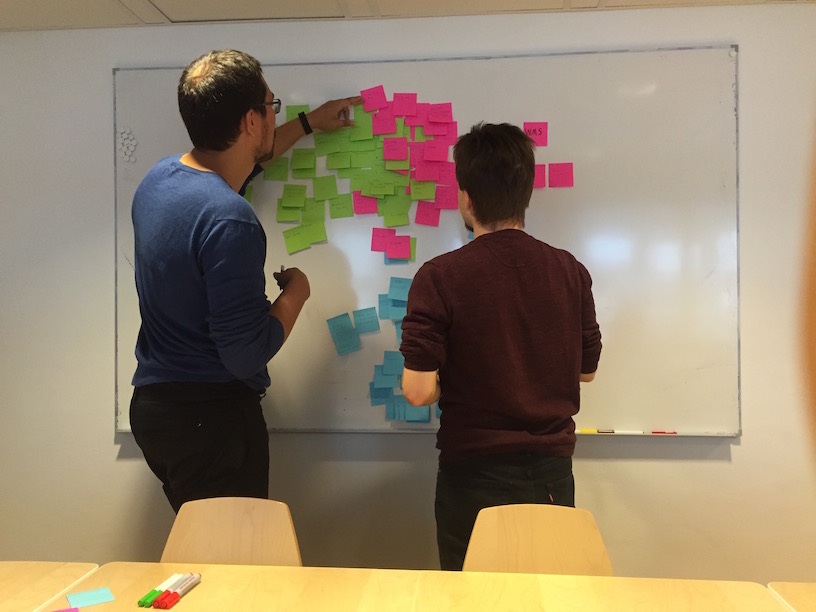 Once the voting is done, clear the board, only keeping the items that received a vote. Move them over to the one side of the board and order them according to the number of votes they received.

Discuss and agree on actions

For as many items that you have time for, let the participants discuss them, starting with the item that garnered most votes. As the conversation goes on, write down and summarise it on the whiteboard next to each note.

Gently guide the discussion towards identifying actions that can be taken to enhance the good and the desired, while mitigating the problematic. As a facilitator you may have to use your feelers to determine when to do this.

An alternative is to time-box the discussion for each item and stating clearly that by the end of the discussion there need to be a decision on the next step, if one can be taken. 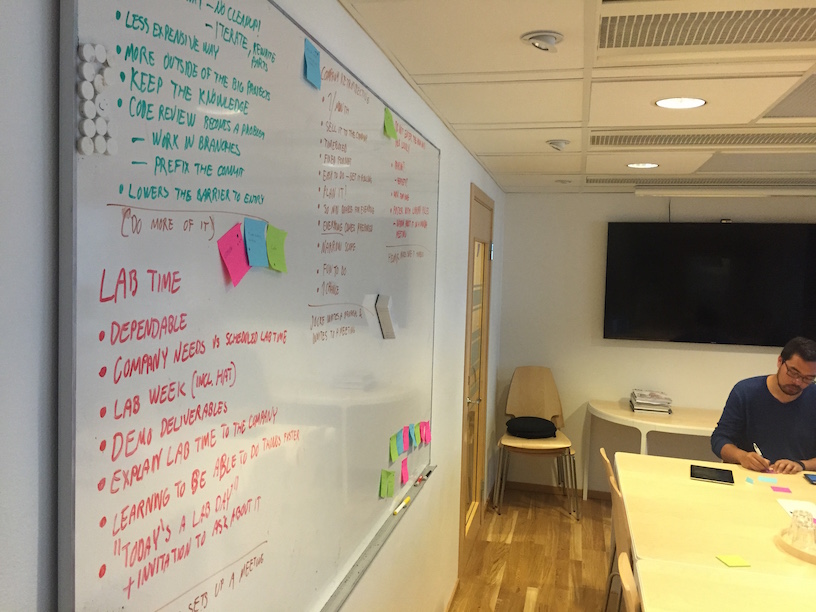 Recap the decisions taken and thank the participants for their time.

Finish by having the participants use the single post-it of the fourth colour to give you some feedback on the retro itself. Have them put it on the door as they leave and collect the post-its after everyone has left.

Origins of this format

A morning-tired brain noticing and jumbling car registration signs out the window of the commuter bus. Yes. Indeed. You just had to ask, didn't you?