Long before embarking on my journeyman tour, I had every intention of taking a longer break than usual over the summer. I imagined spending time on pet programming projects of mine; hacking away whilst basking in the warmth of the sun on the balcony.

Naturally, July rained mostly so that put a bit of a dampener on the last aspect of that plan. Still, I had initially plenty of pleasent days on the balcony where I picked up an ancient interest of mine: assembly programming. More specifically, constructing a virtual machine for the express purpose of programming it using a virtual assembly language. On my ever expanding reading list, arcane knowledge such as MIPS and ARM rubbed shoulders with papers on the performance impact of using a stack-based architecture over a register-based one. I went spelunking in caverns of code to discern the similarities and differences of various virtual machines. Eventually this would prove to be useful as my talk proposal for ElixirConf in Austin, Texas got accepted.

More disturbingly, I ended up with an explosion of yaks requiring shaving and by the time I figured out which to leave with a significant amount of fur still on their bodies, close to three weeks had passed. By then I had be beset with doubt and an unpleasant sense of not producing anything useful. Why was I working on something that obviously none would have any interest in? Why wasting my precious time on something as banal such as this?

Of course I knew that these thoughts were utter nonsense, but they made me aware of the need to come to a full stop and hit the reset button. I took my hands of the keyboard and haven't written more than a few lines of code in the last month and a half. Evidently, my mind was in great need of a vacation and complete change of scenery because as I walked away from computers, I stumbled right into horses.

You see, I often tell the story of how it took Kim ten weeks from when we met to get me into a saddle and start teaching me how to ride whereas it took me ten years to get her to start programming. Conveniently I leave out the point about how close to six years later she work as a software developer while I haven't been riding more than a few times a year at most during that time.

This all changed when Kim came up with a marvellous concoction of allergy suppressing drugs. A pill and two nose sprays later, one of which best can be described as snorting sesame oil, I can spend an entire day in the stable without sneezing my head off. Combine this with one of the horse owners in the stable no longer being able to ride due to soon giving birth and I found myself several days each week riding a very nice Tinker called Timmen. Timmen and I immediately clicked and have had great fun. I usually combine my days in the stable with running to it and back home again, thus getting back into a somewhat sane running form after breaking my leg in late May.

However, the greatest benefit has been and remains once again being able to share and enjoy an interest of Kim's. I cannot stress the importance of sharing an active interest with a loved one. Pair programming in the sofa at home is great, but shaking the ground with Timmen by madly galloping, trying to catch up with Kim on her swift and nimble Arabian Nemah, beats that.

It could have ended there, but Kim got embolden. After only seeing the drugs work twice, she booked a trip to Ireland for the two of us. Suffice to say, the sorest muscles I had after a weekend of cross-country jumping were the ones used by my neverending smile. Flying over fixed fences - faster, higher, and with more control each day - is a sensation that I will cherish. And seek out again at the first oppertunity.

I've easily have had the best summer in years. And it was almost devoid of programming. Soon I will go back to it, but in the knowledge that each weekend Kim and I will go riding.

But above all, together.

I am on my way back from the depression. I can’t say I am feeling completely well yet, but I feel a lot better than before. I don’t break down and cry for no apparent reason any more and my negative thinking 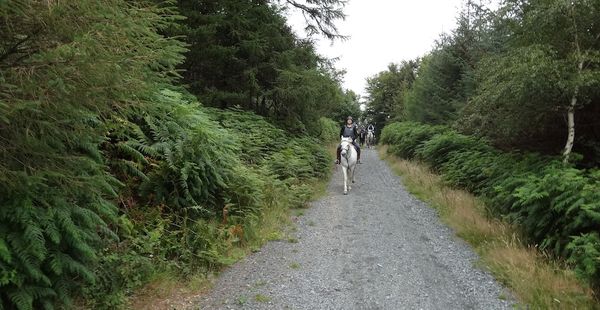 Seems impossible if you ask me. And yet, this year's summer vacation, turned out to be just that. We changed sunny weather and beaches for green fields and rainy showers.